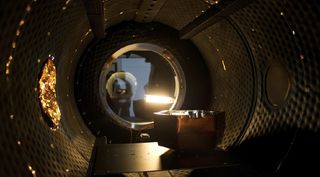 LE BOURGET, France — The French-built instrument for NASA's InSight Mars lander scheduled for launch in March is expected to be repaired in time for shipment to the United States in early January after developing a leak in its vacuum container, the president of the French space agency, CNES, said Dec. 8.

Briefing reporters here at the COP21 United Nations Climate Change Conference, Jean-Yves Le Gall said the leak, which compromised the required high-precision vacuum chamber carrying InSight sensors, was caused by a defective weld that is applied to close off the tank.

The leak's cause has been identified and a new weld performed, Le Gall said. Tests to confirm the new weld's integrity are underway and, assuming no problems, will be completed in time to ship the instrument to the United States in the first week of January. It will then be integrated into the InSight lander in preparation for the March launch. [NASA's Insight Mars Lander Mission in Pictures]

France's space science community has long been heavily invested in Mars exploration, and CNES has been onboard multiple NASA Mars missions.

For InSight, France is providing the Seismic Experiment for Interior Structure (SEIS) instrument, a suite of three seismometers designed to analyze the interior of Mars.

The vacuum environment will permit the seismometers to detect faint ground movement to assess even minor seismic waves deep in the planet's interior.

The titanium sphere, about the size of a melon, had been sealed and testing begun when the leak was discovered.

"The leak is very small but this mission requires a very high level of vacuum and this was not possible unless repaired. It is a very demanding instrument," Le Gall said. "But I believe we have gotten past the problem with three welding barriers to be sure there is no leakage.

"We still need to continue to test it in vacuum conditions for a while — more than a few days — to verify that it is hermetically sealed," Le Gall said.

The vacuum container is completing its test phase at manufacturer Sodern's Paris facility. SEIS had been completed by Sodern and sent to CNES's Toulouse facility in July before being returned to the company for repair and testing.