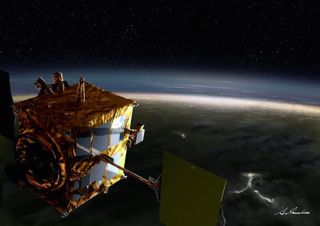 A Japanese spacecraft should be orbiting Venus now, if all went according to plan Sunday (Dec. 6).

It's too early to know if Akatsuki is indeed safely circling the second planet from the sun, the spacecraft's handlers said.

"The orbiter is now in good health," Japan Aerospace Exploration Agency (JAXA) officials wrote in a mission update Sunday. "We are currently measuring and calculating its orbit after the operation. It will take a few days to estimate the orbit; thus we will announce the operation result once it is determined."

The $300 million Akatsuki mission, whose name means "Dawn" in Japanese, launched in May 2010 to study the clouds, weather and atmosphere of Venus, with the aim of helping scientists understand how the planet ended up so much hotter and less life-friendly than Earth. (Surface temperatures on Venus are hot enough to melt lead.)

Akatsuki's orbit will be much more elliptical than originally planned — featuring a period of 8 or 9 days, compared to 30 hours for a 2010 Venus arrival — if Sunday's maneuver worked. But the probe should still be able to achieve most of its mission goals, JAXA officials have said.