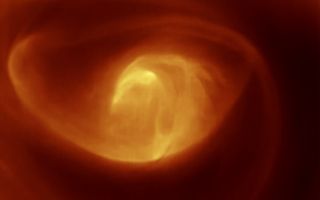 As the Venus Express spacecraft zoomed past the south pole of the a stunning photo of this swirling vortex
(Image: © ESA/VIRTIS/INAF-IASF/Obs. de Paris-LESIA/Univ. Oxford)

While orbiting Venus, the ESA's Venus Express spacecraft, specifically the Visible and Infrared Thermal Imaging Spectrometer known as VIRTIS, captured the whirling gasses at the south pole. Other than glimpses from the 1970s missions of the Pioneer Venus and Mariner 10, details were not seen until 2006 with VIRTIS. [Learn more about the Venus vortex.]