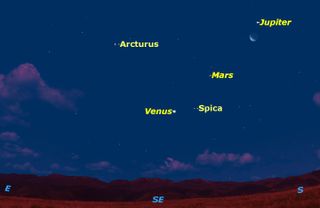 Jupiter and the moon will appear to shine extra close together before dawn on Friday, Dec. 4, 2015, as shown in this Starry Night sky map.
(Image: © Starry Night Software)

If you're a regular night owl or an extreme early-bird sky gazer, then you'll likely see two brilliant objects in the sky overnight tonight and early Friday (Dec. 4), weather permitting.

The first celestial sight is the moon, which in its waning crescent phase appears 42-percent lit and will emerge from above the eastern horizon at around 12:40 a.m. your local time. Shining brightly near the moon will be the largest planet in our solar system: Jupiter.

Jupiter will appear about 2 to 3 degrees above and to the left of Jupiter. Since your clenched fist held out at arm's length covers about 10 degrees of the night sky, the moon and Jupiter will appear rather close, separated by less than one-third of the width of your fist. It is, of course, merely an illusion of perspective: the moon is only about 250,900 miles (403,500 kilometers) from Earth. Meanwhile, Jupiter is 510 million miles (821 million km) away – over 2,030 times farther out in space compared to our natural satellite. [Best Night Sky Sights of December 2015 (Sky Maps)]

At a dazzling magnitude of -2.0, Jupiter shines nearly twice as bright as Sirius, the brightest star in the night sky. Whenever it's above the horizon, Jupiter always attracts immediate attention. The planet is 88,000 miles (143,000 km) wide, but to the human eye on Earth, Jupiter resembles a brilliant silvery white, non-twinkling "star." On March 8, 2016, it will arrive at opposition and be visible all night from sunrise to sunset.

Even without the close proximity of the moon, you can find Jupiter glimmering balefully above the eastern horizon, slightly north of due east by 1 a.m. your local time. But Jupiter will not reach an altitude of 30 degrees above the horizon – one third of the way up in the sky – until 3:10 a.m. For some, that’s considered to be the dividing line between objects that are "low" versus objects that are considered to be "well placed." Sharp telescopic views are seldom possible until an object reaches an altitude of 30 degrees, given the typical turbulent state of Earth's atmosphere.

In a telescope, Jupiter is always a fascinating sight. Light and dark cloud belts in the giant planet’s atmosphere appear to parallel the equator and slowly change.

Christopher Go, an assiduous amateur astronomer located in Cebu, Philippines, monitors Jupiter on a nightly basis. In a Nov. 24 email, he wrote: "Finally caught my first image of the Great Red Spot this season although it is just peeking out at the edge. The color of the GRS is very strong!"

The other attractions are the four Galilean satellites; four other moons that you might want to look at, which were first seen by Galileo with his crude telescope in 1610.

The satellites are fun to watch as they change their position relative to Jupiter from hour to hour and night to night. They can be glimpsed through 7-power binoculars (if you hold them steady) or better yet, asmall telescope.

But early Friday morning initially just three moons will be evident, Io and Europa on one side of Jupiter, while Callisto will be on the opposite side, but much farther away from Jupiter. Then at 1:44 a.m. EST, a fourth satellite, Ganymede will emerge from behind Jupiter on the side opposite to Io and Europa.  All four satellites will then be visible for 82 minutes, but at 3:06 a.m. EST, Io will disappear, becoming eclipsed by the shadow of Jupiter. It will then reappear from behind the disk of Jupiter three and a half hours later.

Not including our own moon, and depending on when you look, you’ll have either three or four moons for the price of one!