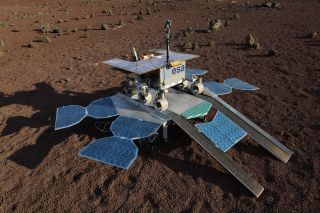 A new series of tests challenged the European Space Agency's Mars rover prototype to descend from its lander while controlled from afar.
(Image: © ESA)

A prototype of Europe's first Mars rover practiced for some of the most stressful moments after arriving on the planet – getting the rover off its landing platform shortly after it arrives on the Martian surface.

A new time-lapse video shows the long-distance drama, which chronicled four successful disembarkations for the European Space Agency's ExoMars rover, along with one failure.

One challenge during the tests was that the rover was being tested in a so-called Mars Yard (a simulated Mars environment) in France, but the researchers were controlling it from the Netherlands, roughly 1,000 kilometers (620 miles) away. Thus, there was a time delay factor in the tests, the European Space Agency said in a statement. [Europe's ExoMars Mission in Pictures]

Researchers are testing the rover and its remote capabilities to prepare for the forthcoming 2018 ExoMars mission, in which the first non-American rover will be deployed on the surface of Mars.

"[The rover's control team] were given no idea where in the sprawling Mars Yard the rover was located for each test scenario — the only information they could access came from cameras and sensors in the rover and lander," ESA officials said in a statement. The descent scenario modeled the upcoming mission's "second most stressful moment" besides the Mars landing, they said.

The controllers also worked with an artificial delay to get them used to working with rovers on Mars, which generally experience at least a 20-minute communication delay as radio waves travel to and from Earth.

For each of the five tests, the rover spent 2 minutes slowly moving down the ramp; in only one test did the rover begin to fall over during its descent. In a real mission, that might have been the journey's end, but the test rover was caught just in time by "helping hands," ESA officials said. The rest of the trials were completed successfully, but the agency said the near fall showed the importance of simulating the scenario ahead of time.

In addition to moving the rover, the control team reconstructed the rover's surroundings and took pictures of the view, to create a panorama. The rover has two ramps from which to descend, so the team is trying to decide which is the safer path for the machine.

The ExoMars pair of missions, which includes participation from Roscosmos (the Russian Federal Space Agency), will start in 2016 with the launch of the Trace Gas Orbiter (TGO). TGO will look at gases of small amounts in the Martian atmosphere and serve as a communications relay for the rover, which will launch in 2018.

The TGO will also sport a small lander prototype called Schiaparelli. Its main purpose will be to demonstrate technologies such as parachutes and braking. It will also do a little bit of science on the surface before its batteries expire.