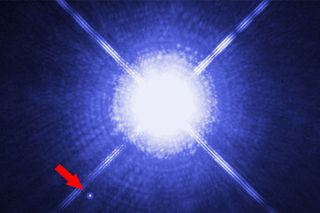 This is a photo of nearby white dwarf Sirius B. No, not the big star at center -- the little faint one just to the bottom-left.
(Image: © NASA, ESA, H. Bond (STSCI), AND M. Barstow (University of Leicester))

New observations of a white dwarf reveal that it is a scorcher, at roughly 250,000 degrees Celsius (482,000 Fahrenheit) -- about 2.5 times hotter than a typical star remnant that is just beginning to cool. What's more, scientists discovered the dwarf lives just at the edge of the Milky Way, contradicting previous research showing it is from outside the galaxy.

The new observations come courtesy of ultraviolet observations performed by the Hubble Space Telescope, suggesting that the star was once five times more massive than our own Sun. No one is quite sure how this star got so hot, and its chemical composition still needs to be analyzed.

"The strange thing about this white dwarf (and its cooler twin H1504+65) is the surface composition," wrote lead author Klaus Werner of the University of Tübingen in Germany, in an e-mail to Discovery News. "It is carbon and oxygen without hydrogen and helium. Currently, there is no good explanation for this phenomenon. Commonly, white dwarfs have either hydrogen-dominated or helium-dominated atmospheres."

A little bit is known about RX J0439.8-6809 by modelling its history. It appears the star's temperature peaked at more than 400,000 degrees Celsius about 1,000 years ago. It was spotted in X-ray images about 20 years ago because it was so hot, but it originally was believed to be in the Large Magellanic Cloud, a galaxy outside of our own.

"Future X-ray surveys (eRosita) combined with optical surveys might reveal more of this kind of white dwarf with unusual surface composition," Werner added. "The search for trace elements (other metals) might give hints as to the evolutionary history."

The research was recently published in the journal Astronomy and Astrophysics.