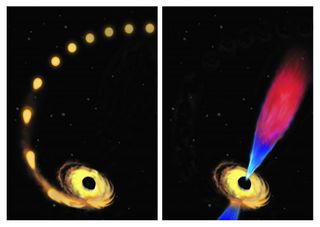 New observations depict a supermassive black hole devouring a star and then emitting jets of high-energy plasma from the star's debris — the first time scientists have observed these phenomena at the same time.
(Image: © Johns Hopkins University/Modified from an original image by Amadeo Bachar)

A supermassive black hole anchoring the center of a nearby galaxy has been caught in a rarely seen double act: ripping apart a nearby sun-size star and shooting out jets of debris from its center at close to light speed.

When a star wanders too close to a black hole, especially the ultraheavy kind that lurks at the center of many galaxies, the black hole's intense gravitational forces pull apart the star and form a disk of orbiting debris. By looking carefully at the unusual galactic moment, researchers were able to also spot a jet of material blasting out from the black hole as result of the star's demise — the first time both the star's destruction and resulting jets have been observed together around this type of black hole, researchers at the International Centre for Radio Astronomy Research (ICRAR) said in a statement.

"It's very unusual when a supermassive black hole at the center of a galaxy actually eats a star — we've probably only seen about 20 of them," said Gemma Anderson, an astrophysicist from ICRAR's Curtin University node, in Australia, and co-author of the new work. [Watch an animation of that star's destruction]

"Everything we know about black holes suggests we should see a jet when this happens, but until now, they've only been detected in a few of the most powerful systems," Anderson said in the statement. Now, we finally found one in a more normal event."

Lead author Sjoert van Velzen, a researcher at Johns Hopkins University in Maryland, heard about the star's destruction observed by a radio telescope in Hawaii in December 2014 (announced via Twitter) and, just three weeks later, joined with a team of 13 other scientists to follow up with other telescopes and track the black hole's progress. While black holes are known for pulling matter in, not releasing it, the researchers hoped to see the hole emit a fast-moving plasma jet after its stellar meal, as predicted in black hole models.

"Previous efforts to find evidence for these jets, including my own, were late to the game," Van Velzen said in a statement released by Johns Hopkins University.

By catching it early enough, and because of its nearby location (just 300 light-years away), the international team of researchers had a chance to observe the star's destruction, and then the jets escaping from inside the black hole, over the course of several months. Measurements of the unusual process confirmed astrophysicists' predictions of how black holes function.

The researchers presented their observations of the star's destruction in early November at the Jerusalem Tidal Disruption Event (TDE) workshop, joined by another group, from Harvard University, that had simultaneously investigated the star.

"The destruction of a star by a black hole is beautifully complicated, and far from understood," Van Velzen said. "From our observations, we learn the streams of stellar debris can organize and make a jet rather quickly, which is valuable input for constructing a complete theory of these events."

The new work was described Nov. 26 in the journal Science.