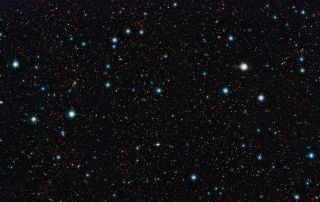 New telescope data pinpoints 574 massive galaxies that formed early on in the universe's life, and researchers can't yet explain how they formed so quickly.
(Image: © ESO/UltraVISTA team; Acknowledgement: TERAPIX/CNRS/INSU/CASU)

New research has revealed 574 massive, ancient galaxies lurking in the night sky, and their existence so close to the time of the Big Bang calls into question scientists' best understanding of how large galaxies form.

The objects are so old that they lack a defined shape; the regular ellipses and spiral galaxies solidified later on in the universe's lifetime. A new video released Wednesday (Nov. 18) from the European Southern Observatory (ESO) reveals the ancient galaxies' locations.

"We are talking about massive galaxies, twice as massive as the Milky Way today," said Karina Caputi, an astronomer at University of Groningen in the Netherlands and lead author on the new work. "Currently, even the most up-to-date galaxy-formation models cannot predict such massive galaxies [before] almost 2 billion years after the Big Bang," she told Space.com. [The Big Bang to Now in 10 Easy Steps]

When they peer at distant galaxies, researchers are looking back in time. So to learn about the earliest years of the universe, scientists need to measure extremely faint and faraway star systems, whose light is often found in the infrared. To focus in on the earliest massive galaxies and determine their age, the researchers combined data from the Spitzer Space Telescope, an orbiting infrared telescope, and the European Southern Observatory's Visible and Infrared Survey Telescope for Astronomy (VISTA) in Chile.

Spitzer's data pointed the way to fainter galaxies that were easy to overlook in VISTA's near-infrared measurements. Then, data from the UltraVISTA survey, which has been scrutinizing one patch of sky since December 2009, gave greater definition and helped the researchers identify how old those fainter galaxies were.

With UltraVISTA, "we're just observing the same part of the sky over and over again," Henry McCracken, a researcher at Institut d'Astrophysique de Paris in France and co-author on the paper, told Space.com.

"It's like the world's most boring observing program," he joked.

But the results are far from boring: Because of the deep scrutiny (and the world's most efficient infrared camera, McCracken added), UltraVISTA can pick up extremely hard-to-see features and distant galaxies, which it releases for free so astronomers can analyze and make use of the data.

"The obvious question, then, was to say: When was the first time in which these very massive galaxies appeared?" Caputi said.

The team of researchers found that the most massive galaxies were not found until around 1 billion years after the Big Bang, ESO officials said in a Nov. 18 statement — but many more than expected formed between 1.1 billion and 1.5 billion years after the Big Bang, much sooner than many models can account for. The researchers reported their work in The Astrophysical Journal in September.

"The predominant theory for galaxy formation is a hierarchical model. You basically assemble galaxies by merging lots of small, little bits," McCracken said. This slow growth of galaxies can explain Earth's local universe well — what the universe looks like at this age — but is simply not fast enough to account for so many massive galaxies so soon after the Big Bang. "There's basically not enough time for these kinds of objects to form," McCracken said.

The researchers said that the faintness of galaxies from the early universe, even massive ones, means that it's possible the survey missed more galaxies even closer to the Big Bang that were obscured by dust. The results might be skewed by dust in another way, as well: Garth Illingworth, an astronomer at University of California, Santa Cruz and the Lick Observatory, told Space.com that the heavy dust could make it more difficult to judge the galaxies' age — there are many more evolved galaxies from later after the Big Bang, and even a few newer galaxies that appeared older could be misleading.

The researchers released their data publicly so others can follow up with their own work. That could include further investigation of measurements from VISTA and Spitzer, as well as views from other telescopes, if possible, like the Atacama Large Millimeter/submillimeter Array, which could image the gas clouds around the early galaxies, and Hubble's successor, the under-construction James Webb Space Telescope. All could help shed light on the earliest conditions of the universe and help reveal the monster galaxies lurking there.

"The data's there," McCracken said. "Other people can see if they agree with us or not."