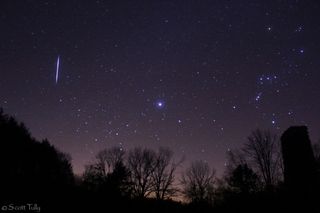 Photographer Scott Tully captured this photo of a Leonid meteor over rural Connecticut in the predawn hours of Nov. 17, 2012.
(Image: © Scott Tully)

The Leonid meteor shower, one of the most celebrated of the year's annual "shooting star" displays, will peak overnight tonight (Nov. 17) and early Wednesday morning.

You can see the famous Leonids this year even if clouds or bright city lights spoil your skies: The online Slooh Community Observatory will air a free Leonids webcast Tuesday at 8 p.m. EST (0100 GMT Wednesday) featuring live views from locations on four continents. You can watch this broadcast by joining Slooh and also gain access to the observatory's archive of past shows.

You can also watch the Leonid meteor shower webcast on Space.com, courtesy of Slooh. The mere mention of the Leonids usually elicits mental images of shooting stars pouring down through the sky like rain. Such "meteor storms" have indeed occurred with the Leonids, such as in 1833 and 1966, when meteor rates of tens of thousands per hour were observed. In more recent years — most notably, 1999, 2001 and 2002 — lesser Leonid displays of "only" a few thousand meteors per hour took place. [Top 10 Leonid Meteor Shower Facts]

But that's not likely to be the case this year. In fact, comparatively speaking, this is going to be a lean year for the Leonids. I'll explain why in a moment. First, let's find out about this shower's lineage.

The Leonid meteor shower is so named because its radiant point, from where the meteors seem to fan out, is located within the constellation of Leo (the Lion), from the backward-question-mark pattern of stars known as "The Sickle."

The meteors are spawned by Comet Tempel-Tuttle, which sweeps through the inner solar system every 33.3 years. Each time the comet passes closest to the sun, it leaves a "river of rubble" in its wake — a dense trail of dusty debris. A meteor storm becomes possible when Earth scores a direct hit on a fresh dust trail ejected by the comet over the past couple of centuries.

The "lion's share" (no pun intended) of comet dust can be found just behind and just ahead of Tempel-Tuttle. The comet last cruised through the inner solar system in 1998; that's why spectacular meteor showers were seen in 1999, 2001 and 2002, with declining numbers thereafter.

No meteor storm this year

This year finds Tempel-Tuttle (and the heaviest concentrations of its meteoroids) near the far end of its elongated orbit. It crossed the orbit of Uranus in 2010, and in September 2014, the comet was as far from the sun as it can get — 1.84 billion miles (2.96 billion kilometers).

As a result, there won't be much debris at the point in the comet's orbit that Earth will be passing on Wednesday morning, but rather just bits and pieces likely loosened from the comet's nucleus a millennium or two ago.

So, this year's Leonids are expected to show only low activity — at best, 10 to 20 meteors per hour might be seen. The moon will not pose a problem for viewers; Earth's nearest neighbor will set before 10 p.m. local time Tuesday evening, leaving the rest of the night dark.

Watching a meteor shower consists of lying back, looking up at the sky and waiting. Keep in mind that any local light pollution or obstructions, like tall trees or buildings, will further reduce your chances of making a meteor sighting.

Leo does not start coming fully into view until after midnight, so that would be the best time to concentrate on looking for Leonids. As dawn is about to break at around 5 a.m., The Sickle will have climbed more than two-thirds of the way up from the southeast horizon to the point directly overhead (called the zenith).

Because the Leonids are moving along in their orbit around the sun in a direction opposite to that of Earth, they slam into the planet's atmosphere nearly head-on, resulting in the fastest meteor velocities possible: 162,000 mph (261,000 km/h). Such speeds tend to produce bright meteors, which leave long-lasting streaks or vapor trains in their wake.

A mighty Leonid fireball can be quite spectacular, but such outstandingly bright meteors are likely to be very few and very far between this year (if any are seen at all).

In 2005, French meteor expert Jeremie Vaubaillon published a technical paper with two colleagues in the journal Astronomy & Astrophysics that forecast Leonid activity up through the year 2100.

The team's calculations suggested that debris ejected from Comet Tempel-Tuttle in the year 636 might cause a brief burst of perhaps 100 Leonids per hour this year at around 10 p.m. EST on Nov. 22 (0300 GMT on Nov. 23). But because these particles are nearly 14 centuries old, they may be, in reality, very widely separated from one another and might not put on much of a show.

Vaubaillon and his colleagues expect the next Leonid storm to come in the year 2034 — when rates could reach up to 2,000 meteors per hour — so mark your calendars.

Editor's note: If you capture an amazing photo of a Leonid meteor or any other night sky sight and would like to share it with Space.com and its news partners for a possible story or image gallery, send images and photos to: spacephotos@space.com.