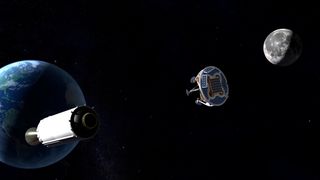 Artist's depiction of SpaceIL's lunar lander on its way to the moon.
(Image: © Courtesy of Spaceflight Industries)

The organizers of a $30 million private race to the moon said they hope the contest's first officially recognized launch contract will have a snowball effect.

Last month, Israel-based SpaceIL announced it had signed a deal to launch its lander to the moon aboard a SpaceX Falcon 9 rocket in the second half of 2017, becoming the first entrant in the Google Lunar X Prize (GLXP) competition to secure a "verified" launch contract.

"I would like to see a real horse race, with multiple teams in the race," Bob Weiss, vice-chair and president of the X Prize Foundation, told Space.com by phone from Jeruselum, where SpaceIL's launch deal was announced. "Innovation comes not just from the winner, but all of the competitors."

The GLXP is offering $20 million to the first privately funded team to place a lander on the moon, have the spacecraft move at least 1,650 feet (500 meters) on the lunar surface, and beam high-definition video and photos back to Earth by the end of 2017. The second team to do this will get $5 million; another $5 million is set aside for achieving other milestones. Sixteen teams remain in the competition.

SpaceIL's mission will be a step toward these goals, the company's CEO, Eran Privman, told Space.com in the same interview. The mission will get to the moon for "a reasonable amount of money" — $50 million, of which 80 percent has been raised, mostly from wealthy private donors, Privman said.

A portion of that money will be used to let students participate in some of the science. Some of the budget will also go to a science experiment that will measure the magnetic field of the moon with higher precision than previous missions were able to achieve, he added.

"We definitely need the [remaining] money to conclude the engineering and land on the moon," Privman said. "Whatever we manage to get on top of it will go to education and science, and once we complete this mission successfully, we will look for the next one."

SpaceL's launch contract is a big milestone for the GLXP because it allows the contest to be extended to the end of 2017. (Competition rules stipulated that at least one verified launch deal had to be in place by the end of 2015, or else the contest would end.)

Other teams now have until Dec. 31, 2016, to submit their notification of a launch contract. Several other teams, including California-based Moon Express, have announced their own launch deals, but SpaceIL is the only one to initiate the verification process with GLXP to date, contest representatives have said.