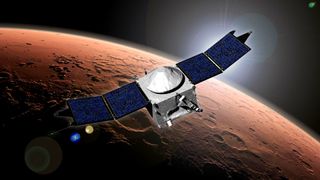 Artist’s illustration of NASA's MAVEN spacecraft, which is investigating how, why and when Mars lost most of its atmosphere.
(Image: © NASA GSFC)

NASA will reveal new results about the atmosphere of Mars this Thursday (Nov. 5), and you can watch the action live.

The space agency is hosting a news conference on Thursday at 2 p.m. EST (1900 GMT) to "announce new findings on [the] fate of Mars' atmosphere," according to a NASA media advisory. You can watch the news conference live here at Space.com, courtesy of NASA TV.

The list of speakers for Thursday's event makes clear that the press conference will report discoveries made by NASA's MAVEN spacecraft, which has been studying the Red Planet from orbit since late 2014:

MAVEN's name is short for Mars Atmosphere and Volatile Evolution. The main goals of the $670 million mission involve determining how, why and when the Red Planet lost most of its atmosphere. (Mars' air was once thick enough to support large bodies of liquid surface water, but it's now just 1 percent as dense as that of Earth at sea level.)

"Scientists will use MAVEN data to determine the role that loss of volatiles from the Mars atmosphere to space has played through time, giving insight into the history of Mars' atmosphere and climate, liquid water, and planetary habitability," NASA officials wrote on MAVEN's mission page.

MAVEN launched in November 2013, arrived in orbit around the Red Planet in September 2014 and began its science mission two months later.

MAVEN is one of five operational spacecraft currently orbiting Mars. The other ones are NASA's Mars Odyssey and Mars Reconnaissance Orbiter, India's Mangalyaan probe and the European Space Agency's Mars Express.