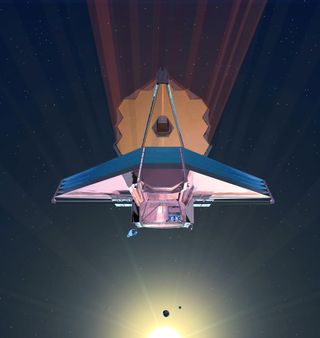 Officials for the second White House Astronomy Night announced on Tuesday (Oct. 19) that the documentary, entitled "Telescope," will air on both Discovery Channel and Science Channel as part of a special "Weekend of Science Programming." The announcement was made at the astronomy event, hosted by President Barack Obama, and confirmed in a statement from the Discovery Channel, obtained exclusively by Space.com.

The $8.8 billion James Webb Space Telescope (JWST), which is scheduled to blast off in late 2018, is touted as the successor to NASA's venerable Hubble Space Telescope, which has been observing the heavens for 25 years. Some of Hubble's major discoveries include nailing down the age of the universe, and finding that the expansion of the universe is accelerating.

The infrared-optimized JWST will peer further back in time to view the universe's first galaxies, and will also assist in exoplanet hunting — something that Hubble does but was not designed for. JWST is also expected to look at targets that Hubble imaged, such as galaxies and star clusters, to obtain further information.

The two telescopes are expected to operate concurrently for at least several years, allowing for collaborations. (Hubble should last through at least 2020, barring any unforeseen failures, the telescope's operators have said.)

"A new generation has been inspired to design and build the greatest telescope yet — NASA's James Webb Space Telescope — which is 100 times more powerful than Hubble, and will be a veritable time machine capable of taking us back to the origins of our universe and of identifying the signature of life on planets far outside our solar system," the statement said.

"Telescope" will show viewers how JWST was built and also explore the questions of where humans came from and how the universe arose, officials added.

"'Telescope' is Discovery's latest foray into space, part of a deep and lasting commitment to telling compelling stories about human ingenuity and our drive to understand the world around us," said John Hoffman, executive vice president of documentaries and specials for Discovery Channel, an email to Space.com. "Academy Award nominee Nathaniel Kahn turns his keen lens to the story of NASA's mission to build the most powerful telescope in history and reveal the deepest secrets of the universe. It will premiere as part of a special weekend of science programming on both Discovery Channel and Science Channel."

An exact airdate for the documentary has not yet been released.