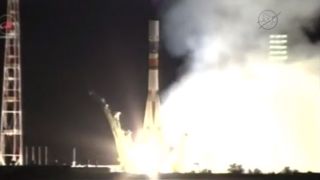 Russia launched an unmanned cargo ship Thursday (Oct. 1) on a speedy mission to deliver tons of fresh supplies to a waiting crew on the International Space Station.

The cargo ship, called Progress 61, blasted off atop a Russian Soyuz rocket at 12:49 p.m. EDT (1649 GMT) from the Baikonur Cosmodrome in Kazakhstan, where it was late Thursday night local time. If all goes well, the spacecraft will spend six hours in flight, orbiting Earth four times as it chases the space station.

The Progress 61 spacecraft (also known as 61P) is carrying 3.1 tons of supplies for the six-man crew of the International Space Station. The freighter will arrive at the station at 6:54 p.m. EDT (2254 GMT). You can watch the space docking live on Space.com, courtesy of NASA TV, beginning at 6:15 p.m. EDT (2215 GMT).

Russia's Progress spacecraft are three-module cargo ships that are similar in appearance to Russia's Soyuz crew capsules. But in place of a crew capsule, Progress vehicles carry propellant for use in maneuvering the space station. Progress vehicles are also disposable, with Progress 61 slated to be discarded in December so it can burn up in Earth's atmosphere.

The International Space Station relies on a fleet of robotic spacecraft to keep its crew fully stocked with supplies. In addition to Russian Progress vehicles, unmanned spacecraft from Japan and Europe have delivered goods to the station. A Japanese HTV-5 cargo ship left the space station on Monday (Sept. 28) after completing its mission.

SpaceX and Orbital ATK are currently working to return their rockets and spacecraft to flight after separate failures.

On June 28, an unmanned SpaceX Falcon 9 rocket broke apart during the launch of its Dragon cargo ship. SpaceX officials have cited a faulty strut as the cause of the failure. In October 2014, an Orbital Antares rocket exploded just after liftoff, destroying its robotic Cygnus spacecraft.

Earlier this year, on April 28, a Russian Progress 59 spacecraft failed to reach the space station due to a malfunction just after launch. A subsequent Progress 60 launch in July successfully flew to the space station.