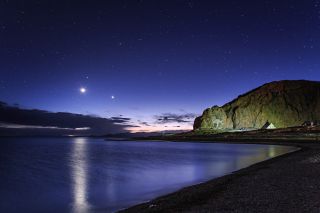 Astrophotographer Jeff Dai sent in a photo of Venus and Jupiter over Lake Namtso, Tibet, caught on July 15, 2015. Venus will be extremely bright in the morning sky during September and October.
(Image: © Jeff Dai)

If you see a bright light just above the horizon at sunrise, don't panic! It's not a UFO — it's probably just Venus.

Planetariums, observatories, weather offices and maybe even police stations may receive a bevy of inquiries in the coming days and weeks concerning a strange bright dot that is now dominating the predawn eastern sky. As sunrise comes later and later, more and more people may see this bright morning object.

But it's only the planet Venus in the opening stages of a spectacular morning apparition that will continue through September and October. In addition, Jupiter will join Venus in the early-morning sky for a gorgeous celestial tango. [Photos of Venus, the Mysterious Planet Next Door | Venus]

Venus made the transition from the evening sky to the morning sky on Aug. 15, when it was rising 45 minutes before sunrise. By the start of September, it was coming up before the break of dawn, at around 4:50 a.m. local time. For the rest of this month, it rises about 2.5 minutes earlier than it did the previous morning. From Sept. 21 through Oct. 26, Venus will rise no later than 3:30 a.m., and will hold court in complete darkness for more than 2 hours before the eastern sky begins to brighten.

All month long, Venus will continue to brighten, and early-morning commuters will likely wonder about this brilliant luminous object that suddenly burst upon the predawn scene. By the end of September, Venus will be firmly established as a dazzling harbinger of sunrise.

Meanwhile, for the second time in 2015, Venus and Jupiter will engage in a close conjunction — this time, separated by just more than 1 degree, with Venus passing to the lower right of Jupiter and shining more than 10 times brighter than the gas giant. Then, there will be two "mysterious" bright lights for the price of one!

As October ends, Venus rises almost 4 full hours before the sun and hangs at nearly 40 degrees at sunrise.

Some stargazers might wonder why Venus became a dazzling morning entity more quickly than those occasions when it seems to take many days, weeks and sometimes even months to make the transition into the evening sky.

The difference between this current transition and evening-sky transitions lies in Venus' position relative to the Earth. When Venus is moving from the morning sky into the evening sky (called "superior conjunction") it's positioned on the opposite side of the sun relative to Earth. Located about 160 million miles (257 million kilometers) from Earth on these occasions, Venus is moving at its slowest against the background stars. What's more, it is also moving in the same apparent direction against the stars as the sun — to the east. So, in the days leading up to and after superior conjunction, Venus continues to languish in the bright glare of the sun.

In an evening transition, Venus moves just far enough away from the sun to be glimpsed for a short time, low near the western horizon shortly after sunset. After a number of weeks, it climbs high enough to become visible in the evening sky.

But for a morning transition, things are much different: On Aug. 15, Venus was at "inferior conjunction," meaning it was passing between Earth and the sun. It was also only about 25 million miles (40 million km) from Earth — more than six times closer than at superior conjunction — so it appears to be moving much faster against the background stars. And, most important of all, as seen from Earth, the sun and Venus appear to be moving in opposite directions. While the sun plods along toward the east, Venus is racing away to the west, which allows it to literally "bolt" into the morning sky and become readily established as a predawn beacon over a span of just a week or two, as opposed to many weeks in the evening.

And lastly, because it's so much nearer to Earth, morning apparitions begin with Venus already near its peak brilliance.

Through a telescope right now, the phase of Venus looks most remarkable. Observers with optical aid will be treated to the marvel of a large crescent. You can even see the crescent with 7 X 50 binoculars. In the weeks to come, the crescent will slowly thicken and shrink as Venus pulls away from the Earth. As November opens, Venus will resemble a half moon. Later that month, continuing through the remainder of the fall and into the winter, Venus will have shrunk to a tiny, albeit brilliant, gibbous disk.

So, if you hear about any early-morning UFO sightings during the coming weeks, know that these are most likely Venus sightings!

Editor's note: If you capture an amazing view of Venus or any other night sky view and want to share it with Space.com, send images and comments in to managing editor Tariq Malik at: spacephotos@space.com.