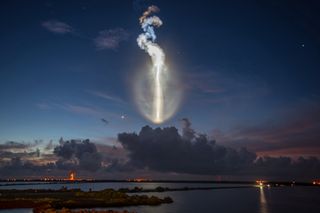 Early this morning, in a double display of sheer power and explosive force, two rockets thousands of miles apart blasted off toward space within 6 hours of each other.

Just before dawn today (Sept. 2), a United Launch Alliance Atlas V rocket lifted off from Florida's Cape Canaveral Air Force Station carrying a military communications satellite. The rocket's fiery tail reflected the light coming from below the horizon, creating the illusion of a glowing orb hanging over the water. The fantastic sight was captured in the photograph above.

Earlier in the day (12:37 a.m. EDT (0437 GMT), a Russian Soyuz rocket blasted off from the Baikonur Cosmodrome in Kazakhstan carrying three human passengers headed for the International Space Station.

Photographs of the Soyuz rocket taking off show the enormous trail of fire that propelled the rocket skyward. The arrival of the three spaceflyers at the orbiting laboratory early Friday morning (Sept. 4) will bring the total crew count to nine. There have not been that many crewmembers on the station at once since November 2013, according to NASA.

The Soyuz spacecraft is carrying cosmonaut Sergey Volkov; Denmark's first astronaut, Andreas Mogensen of the European Space Agency (ESA); and Kazakhstan's Aidyn Aimbetov. After launch, the three astronauts radioed a status update down to mission control, saying, "Everything is in order on board."

The Atlas V rocket that took off from Cape Canaveral carried the fourth satellite in the U.S. Navy's MUOS communications network. The satellite system "works like a smartphone network in space," according to a statement from the Navy, and will be used by military personnel around the world. The satellites are built by Lockheed Martin.