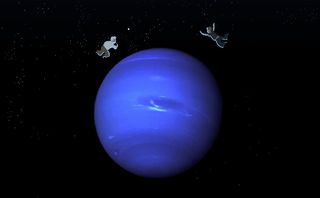 An image from the Web comic "Brassens in Space," by French cartoonist Boulet. In the comic, the artist takes the songwriter Georges Brassens on a tour of the solar system, to show him the wonder and awe made possible by science.
(Image: © Boulet/bouletcorp.com)

Does science kill the poetry of nature, or does it write new volumes of wonder and awe?

A French cartoonist who goes by the name Boulet says it's the latter, and he expressed his opinion in a gorgeous Web comic called "Brassens in Space," which you can find here. Boulet's comic takes readers on a journey through the cosmos, pointing out just a few of the awe-inspiring landscapes made visible by science.

Boulet's inspiration for the comic was a song by the French singer Georges Brassens. The song laments that science has taken away humanity's belief in ancient gods. "The song always bothered me…" Boulet tells the songwriter. "It sounds like … Like you're blaming science for killing poetry. And I strongly disagree!" [Fly Through Real Space Photos in Amazing Video]

The comic is Boulet's attempt to convey that, rather than killing poetry and passion, science has provided new things to be passionate about, by revealing the wonders of the universe that were once hidden.

The Web comic shows a young Boulet looking at the night sky through a telescope in his backyard. From there, he could see some of those incredible cosmic locations, and dreamed of visiting them. He takes Brassens on a tour of the solar system, visiting places like the gas giant Jupiter.

"It's Hell there, an entire world made of storms so violent that would make a nuclear blast look like a mosquito's fart," the comic said. "And it's just … THERE. Floating in the sky, visible from your garden!"

Throughout their illustrated journey, Boulet tries to show Brassens how knowledge of the universe has opened up more opportunities to be awestruck, humbled, passionate and poetic.

"I see in the night sky a sort of opposite Plat[o]'s Cave: when you shut down the blinding light, you can see billions of things hiding in the dark," Boulet wrote in the comic. "So many wonders in this ocean, like the lights of the Pleiades, shining like little diamonds…And the emotion you feel the first time you see Saturn and its rings, so tiny in the telescope!"

To get the full experience, go read the entire comic (and thanks to The Planetary Society blog for pointing it out to us). If you're already a lover of the cosmos, you'll know exactly what Boulet is talking about. And if you aren't totally awed by what astronomy has revealed about the universe, this comic might just convince you.