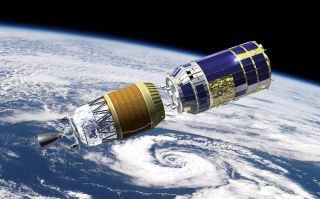 A robotic Japanese cargo ship will launch toward the space station Wednesday morning (Aug. 19), and you can watch the liftoff live.

If all goes according to plan, the freighter will arrive at the International Space Station (ISS) on Monday (Aug. 24) after a five-day flight. [HTV: Japan's Robotic Space Cargo Ships in Pictures]

HTV-5 is loaded with about 6 tons (5.5 metric tons) of food, water, other supplies and scientific hardware, including equipment for the ongoing "twins study" NASA is carrying out with the help of astronaut brothers Scott and Mark Kelly.

Scott Kelly and Russian cosmonaut Mikhail Kornienko arrived at the space station in March, kicking off the first-ever yearlong mission aboard the orbiting lab. The project should help pave the way for human missions to Mars and other far-flung destinations, NASA officials say.

As part of the yearlong mission, researchers are comparing how long-duration spaceflight affects Scott Kelly, using his identical twin, Mark, who is on the ground, as a control.

HTV-5 is also toting 14 Earth-observing "Dove" cubesats built by San Francisco-based startup Planet Labs. These tiny satellites will eventually be deployed from the space station, joining dozens of other Doves to provide high-resolution imagery of our planet to a variety of customers.

Also aboard the Japanese freighter is the Calorimetric Electron Telescope (CALET), an instrument that will hunt for signs of elusive dark matter and characterize high-energy cosmic rays, which can pose a radiation threat to astronauts, NASA officials said.

Japan's HTV spacecraft is also known as Kounotori, which means "white stork" in Japanese. (The name refers to the spacecraft's mission of delivering important cargo.)

The HTV is one of four robotic spacecraft that currently resupply the space station, along with Russia's Progress freighter and the Dragon and Cygnus vehicles, which are built by American companies SpaceX and Orbital ATK, respectively. SpaceX holds a $1.6 billion NASA deal to fly at least 12 resupply missions using Dragon and its Falcon 9 rocket, while Orbital's $1.9 billion contract is for eight flights with Cygnus and a rocket called Antares.

The HTV, Progress and Cygnus are designed to burn up in Earth's atmosphere at the end of their cargo missions, while Dragon makes a parachute-aided splashdown in the ocean when its time in space is done.

HTV-5 was originally supposed to launch on Sunday (Aug. 16), but bad weather has forced several delays.