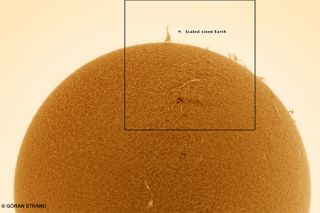 From his backyard in Östersund, Sweden, professional photographer and astrophotographer Göran Strand took a look at the sun using his portable solar telescope “to see if something interesting was going on.” And sure enough, there was something VERY interesting going on. Something was towering over the solar disk — something that looked like… the Eiffel Tower?

Of course, this isn’t the famous Parisian landmark, nor is it some Photoshop trickery; the structure Strand had spotted was a solar prominence, and a beautiful one at that.

“This big prominence got my attention right away, even in my small 50mm telescope it was a beautiful sight,” Strand told Discovery News via email. “While setting up my bigger solar telescope I thought of how the prominence looked and that it reminded me of the Eiffel Tower in Paris.”

In the final image, the size of the Earth has been added to give a sense of scale. A rough comparison suggested that this prominence is approximately 7-Earth diameters high, reaching high into the sun’s atmosphere (the corona).

As they are cooler than the surrounding corona, they generate visible light and can therefore be spotted fairly easily though specialized equipment such as solar telescopes and eclipse glasses. (NOTE: Never look directly at the sun as serious eye injuries and even blindness can result.)

Also, as the sun is rich in ionized hydrogen, astronomers use hydrogen alpha (or H-α) filters to produce observations of stunning detail of prominences and chromospheric features on the solar disk.

PHOTOS: The Psychedelic Anatomy of a Solar Flare