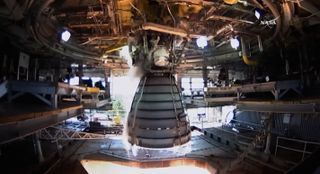 An RS-25 engine — four of which will compose the core stage of NASA’s Space Launch System megarocket — undergoes a 9-minute “hot fire” test at the agency’s Stennis Space Center in Mississippi on Aug. 13, 2015.
(Image: © NASA TV)

NASA put the engine at the heart of its huge next-generation rocket to the test again today (Aug. 13).

The agency performed a nearly 9-minute-long "hot fire" test of an RS-25 engine at Stennis Space Center in Mississippi. Four RS-25s will power the core stage of the Space Launch System (SLS) megarocket, which NASA is developing to get astronauts to asteroids, Mars and other deep-space destinations. You can see a video of the rocket engine test here.

The RS-25 blazed on the test stand for 535 seconds — the same amount of time the core engines will fire during an actual SLS launch. [See images of NASA's SLS megarocket]

"There are probably some people in the control center high-fiving, because that was a very successful test," Gary Benton, RS-25 test project manager at Stennis, said on NASA TV just after the test concluded.

Today's test was the sixth of seven planned hot-fire trials for the RS-25, which also served as the main engine for NASA's now-retired space shuttle fleet.

The seven-test series is "designed to put the upgraded former space shuttle main engines through the rigorous temperature and pressure conditions they will experience during a launch," NASA officials said in a statement.

"The tests also support the development of a new controller, or 'brain,' for the engine, which monitors engine status and communicates between the vehicle and the engine, relaying commands to the engine and transmitting data back to the vehicle," the officials added. "The controller also provides closed-loop management of the engine by regulating the thrust and fuel-mixture ratio while monitoring the engine's health and status."

The initial version of SLS will stand 321 feet (98 meters) tall and be capable of lofting 77 tons (70,000 kilograms) to low Earth orbit. But NASA also plans to develop an "evolved" 384-foot-tall (117 m) SLS variant that can loft 143 tons (130,000 kg) and generate about 20 percent more thrust than the agency's famed Saturn V rocket, which sent the Apollo missions on their way to the moon.

On crewed flights, SLS will be topped by NASA's Orion capsule, which is also in development.

SLS and Orion are scheduled to blast off together for the first time in late 2018, on a flight known as Exploration Mission 1 (EM-1). The seven-day EM-1 will send an uncrewed Orion on a journey around the moon, to test out many of the capsule's key systems.

A number of tiny cubesats will launch as secondary payloads on EM-1; some of these bantam craft will hunt for water ice on the moon, measure how deep-space radiation affects DNA and perform an up-close investigation of a near-Earth asteroid.