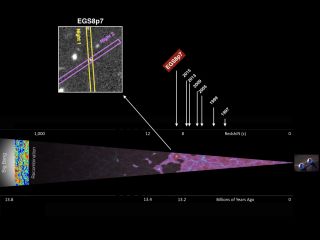 W. M. Keck Observatory researchers confirmed EGSY8p7 as the most distant galaxy whose spectrum places it at a redshift of 8.68 at a time when the universe was less than 600 million years old. Image released August 5, 2015.
(Image: © ADI ZITRIN, CALIFORNIA INSTITUTE OF TECHNOLOGY, 2015)

Astronomers found the most far-flung galaxy ever discovered, NASA's Curiosity rover celebrated three years on Mars and Europe's Rosetta mission marked one year in orbit around a comet. Here are Space.com's top stories of the week.

The universe's most distant galaxy

Astronomers have spotted the farthest-flung galaxy in the known universe. The newfound galaxy, known as EGSY8p7, lies about 13.2 billion light-years from Earth — meaning astronomers are now seeing the mass of stars as it existed just 600 million years after the Big Bang that created the universe. [Full Story: Ancient Galaxy Is Most Distant Ever Found]

NASA's Mars rover Curiosity has now been trundling across the Red Planet for three very productive and eventful years. Curiosity landed on the night of Aug. 5, 2012, pulling off a dramatic and unprecedented touchdown with the aid of a rocket-powered "sky crane" that lowered the 1-ton rover gently to the Martian surface via cables. [Full Story: 3 Years on Mars! Curiosity Rover Reaches Milestone]

What will New Horizons' legacy be?

Scientists are working hard to come up with ways to disprove claims of life elsewhere in the universe, because nobody wants to be the one who gets it wrong. [Full Story: Is That Really Alien Life? Scientists Worry Over False-Positive Signs]

The historic F-1 rocket engines that once launched NASA's Apollo astronauts to the moon on the Saturn V rocket have been restored by Jeff Bezos. [Full Story: Apollo Moon Rocket Engines Recovered by Amazon CEO Preserved for Display]

Tiny cubesat headed to the moon

NASA has greenlit a mission that will send a tiny "cubesat" to search for moon water from lunar orbit. The Lunar IceCube mission will likely launch in 2018, on the first flight of NASA's Space Launch System megarocket. [Full Story: Tiny Cubesat Will Hunt for Water Ice on the Moon]

While a true "Earth twin" remains elusive, here are what NASA considers to be the six closest exoplanet analogues to our home planet. [Full Story: The 6 Most Earth-like Alien Planets]

For the first time, astronomers have spotted a protogalactic disk — a giant whirling cloud of gas that gives birth to a galaxy — and the discovery could reveal clues about how galaxies form. [Full Story: Monstrous Whirling Gas Cloud Reveals Clues About Galaxy Formation]

A team of NASA engineers wants to put drones on Mars. These flying robotic sentinels could reach more of the Martian surface, and possibly solar system moons or the dark, sunless craters on asteroids. [Full Story: Drones in Space! NASA's Wild Idea to Explore Mars (Video)]

Astronomers have announced the discovery of a truly monstrous structure consisting of a ring of galaxies around 5 billion light-years across — and it defies cosmological theory. [Full Story: Giant Mystery Ring of Galaxies Should Not Exist]