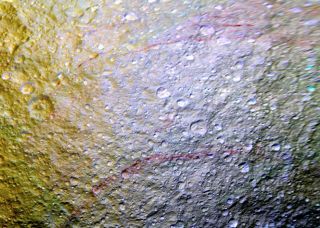 An icy moon of Saturn has mysterious red arcs of material crisscrossing its surface — and no one knows exactly how they got there.

The Cassini spacecraft caught these graffitilike features on camera as it imaged the northern side of the Tethys, which is one of Saturn's larger moons.

While the arcs faintly show up in 2004 pictures, the latest images, from April, are the first to really show their colors by incorporating the right viewing conditions and wavelengths invisible to the human eye. This is partly because Saturn and its moons' northern hemispheres are currently in summer, providing better illumination of this region. [Video: See the Blood-Red Streaks of Tethys]

The features were a surprise to scientists because red tints are rare in the solar system. Until now, astronomers have spotted a few small, reddish craters on Saturn's icy moon Dione, and identified many rouge zones on the icy surface of Jupiter's Europa.

Scientists don't exactly know how these features occurred. Perhaps they are ice with chemical impurities, leftovers from gas released from the moon or artifacts from features (such as fractures) that were smaller than the resolution of the image.

"The red arcs must be geologically young, because they cut across older features like impact craters, but we don't know their age in years." Paul Helfenstein, a Cassini imaging scientist at Cornell University who helped plan the observations, said in a statement.

"If the stain is only a thin, colored veneer on the icy soil, exposure to the space environment at Tethys' surface might erase them on relatively short time scales."

Icy moons lke Tethys are considered a key area of interest in our solar system because they could host microbial life if enough chemical energy and warmth is available in the oceans below the ice. In recent years, plumes of gas have been repeatedly observed at Enceladus, another of Saturn's moons, and in 2013 the Hubble Space Telescope spotted a single, large-plume event at Europa.

Cassini will do follow-up observations of Tethys at a higher resolution later this year. The mission is in the final two years of work before the spacecraft runs low on fuel in September 2017. When that happens, it will plunge into Saturn's atmosphere to protect the icy moons from possible contamination.