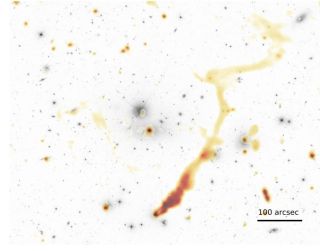 Astronomers have spotted hundreds of thousands of previously unknown galaxies, a raft of new studies reports.

The huge data haul should help researchers better understand the birth and growth of supermassive black holes, the evolution of galaxy-cluster mergers and many other cosmic phenomena, discovery team members said.

The team consists of more than 200 astronomers from 18 countries who pored over results from the first part of a sky survey performed by the Low Frequency Array (LOFAR), a network of radio telescopes operated by the Netherlands Institute for Radio Astronomy (known as ASTRON). Most LOFAR scopes are in the Netherlands, but the system spans multiple European countries, including Germany, France and the United Kingdom. [The Universe: Big Bang to Now in 10 Easy Steps]

The researchers discovered and mapped 300,000 radio sources, nearly all of which, the scientists said, are extremely distant galaxies. These detected radio emissions are dominated by fast-moving jets of material rocketing away from the supermassive black holes at these galaxies' hearts.

"LOFAR has a remarkable sensitivity, and that allows us to see that these jets are present in all of the most massive galaxies, which means that their black holes never stop eating," team member Philip Best, of the University of Edinburgh in Scotland, said in a statement.

"With LOFAR, we hope to answer the fascinating question: 'Where do those black holes come from?'" team member Huub Röttgering, of Leiden University in the Netherlands, said in the same statement.

The newly reported observations — which were published online last Tuesday (Feb. 19) in 26 papers in a special issue of the journal Astronomy & Astrophysics — also provide a window on galaxy-cluster mergers. These dramatic collisions accelerate deep-space particles to tremendous speeds, which create swaths of radio emission that can span millions of light-years.

But this doesn't tell the whole story, the new results suggest.

"What we are beginning to see with LOFAR is that, in some cases, clusters of galaxies that are not merging can also show this emission, albeit at a very low level that was previously undetectable," team member Annalisa Bonafede, of the University of Bologna and INAF in Italy, said in the same statement. "This discovery tells us that, besides merger events, there are other phenomena that can trigger particle acceleration over huge scales."

The discoveries above should be just the tip of the LOFAR iceberg. The new studies cover only the first 2 percent of the sky survey, LOFAR team members said. When complete, they added, the project should map a total of 15 million cosmic radio sources.

"Just imagine some of the discoveries we may make along the way," ASTRON Director General Carole Jackson said in the same statement. "I certainly look forward to it."