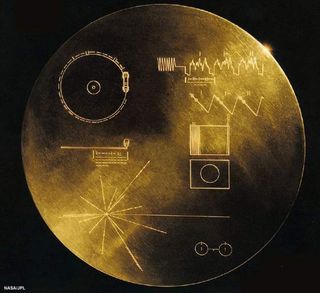 The Voyager spacecraft carry records with 115 images and a variety of natural sounds from Earth, along with music from different cultures and eras and spoken greetings in 55 languages. Instructions for playback are also included.

A fresh perspective on searching for aliens suggests ET is more likely to send us something akin to a message in a bottle rather than relying on energy-intensive, inefficient radio messages.

The professional hunt for ET depend largely on huge telescopes that scan for electronic intelligence in the ether, on the assumption that an brainy, technologically advanced civilization might try to reach out to others, or that their communications would leak into space.

But sending a signal across the cosmos is expensive an inefficient, argues Christopher Rose, a professor of electrical and computer engineering at Rutgers University. The idea is detailed in the Aug. 25 issue of the journal Nature.

Rose and physicist Gregory Wright initially set out to learn how to send the most information over a wireless channel. They then considered the amount of energy needed to send a signal over greater distances. As logic suggests, more energy is needed to send a message farther, and the signal weakens.

Radio waves, laser beams or X-ray pulses and other electromagnetic signals all travel at the speed of light. But the farther they go, the more they disperse. That makes them harder to detect.

"Think of a flashlight beam," Rose said. "Its intensity decreases as it gets farther from its source."

Seth Shostak knows about this problem. Shostak worked on the SETI Institute's Project Phoenix, a just-finished search for extraterrestrial radio signals (they didn't hear any) that was the most comprehensive so far. Not involved in Rose's research, Shostak wrote recently that sending a barely detectable radio-based signal across 100 light-years and in all directions would require 100 billion watts of power. Translation: You'd have to focus the output of all American power plants to do the job.

Interstellar radio programs face another problem in garnering listeners. Once an electronic signal passes its intended recipient, it is gone for good. If the creatures on a target planet have their electronic ears tuned to some other frequency when a signal arrives, or if they have yet to develop the right listening technology, the effort to make contact is wasted.

A written message in a space capsule, however, could have landed on Earth millennia ago and await discovery. And a spacecraft, once up to speed, can cruise for long periods with little additional power input.

The downside to the message-in-a-bottle approach: Human technology, at least, can't propel a spacecraft to even a significant fraction of light-speed. So getting a note from one star system to the next would take more generations than the average human mind can contemplate.

The most distant probe sent by earthlings is Voyager 1, just crossing the outer boundary of the solar system. After a 27-year journey it is 90 times the distance from Earth to the Sun, or nearly 8.4 billion miles (13.5 billion kilometers). A radio signal can go that far and back in about a day -- well more than 26 years more quickly!

The next nearest stars, in the Alpha Centauri system, are 4.3 light-years distant. That's more than 3,000 times what Voyager has so far covered.

However, so long as time is not of the essence, Rose and Wright figure hard copy would be the preferred method to talk across the stars.

"If haste is unimportant, sending messages inscribed on some material can be strikingly more efficient than communicating by electromagnetic waves," Rose said.

Further, he points out, long messages are handled more efficiently by inscription.

NASA's two Voyager probes exhibit such an effort. Each carries a 12-inch, gold-plated copper disk with sounds and images that portray terrestrial life and culture. The cost to send the records was practically inconsequential to the overall price tag of the mission, whose main purpose was to study the planets.

Radio pulses announcing anything more than "we exist" would consume more energy (which requires money) for every word.

Rose is not against listening. He just thinks looking might prove more fruitful. He also notes that messages might not arrive as language, per se. Perhaps organic material embedded in an asteroid, the Moon or a satellite of Jupiter would reveal the presence of life elsewhere. That of course is not a new idea. Other scientists have considered that unintelligent (microbial) life could even travel between planets embedded in a rock kicked up by an asteroid impact. No calling card required.