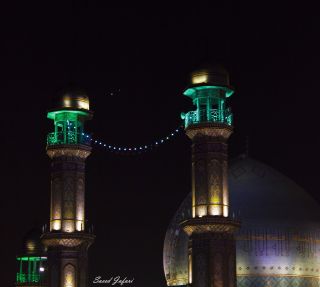 A close encounter between Venus and Jupiter, with the Rasulullah Mosque in Tehran, Iran, in the foreground.
(Image: © Jafari)

As Muslims worldwide celebrate the holy month of Ramadan, Venus and Jupiter are providing cosmic decorations during this period of religious reflection.

Both Venus and Jupiter are visible with the naked eye in the western sky just after sunset. They are in close conjunction during July, just in time for the end of Ramadan (Eid al-Fitr), which will fall on or near July 17 (the exact date can vary based on location).

Space.com reader Saheed Jarafi sent in two sublime pictures of Jupiter and Venus behind the Rasulullah Mosque in Tehran, Iran. Ramadan is a Muslim religious celebration honoring the revelation of the Quran, the holy book of Islam, to the prophet Muhammad. Many Muslims celebrate the month by fasting during daylight hours.

Jupiter and Venus will slowly drift apart in July after getting as close as 20 arc minutes (0.33 degrees) on June 30, about two-thirds the apparent width of the full moon. As the month continues, the two planets will become harder to see because they will set closer to the sun, meaning they will be shining in a bright, twilight sky.

In a telescope, the planets appear virtually the same size (32 arc seconds, or 1/60 the apparent diameter of the moon). However, Venus appears much brighter. It has reflective clouds and is seven times closer to Earth than Jupiter, which is the biggest planet in the solar system.

Venus is technically at its brightest on July 10, but will be hard to see by then because it is so low in the sky at twilight. At the end of July, it will be setting while the sky is bright. Jupiter will likely fade so much that binoculars will be needed to see it by July 26.

Conjunctions happen in Earth's sky because the planets all travel along the same approximate plane called the ecliptic. From time to time, planets that are in a smaller orbit around the sun "catch up" in the sky to planets on a larger orbit.