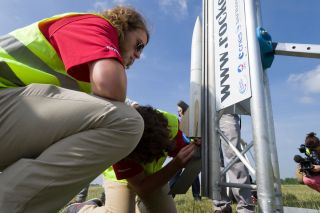 Niles Butts looks on as his teammate makes a final rocket adjustment during the International Rocketry Challenge, where his Alabama team took first place.
(Image: © Raytheon)

It was a question of precision: The rocketeers had to get their payload as close as possible to 800 feet (244 meters) in the air within 46 to 48 seconds, taking weather, wind speed, subtle changes in weight and precise angles into account. If the payload was damaged, it would be instant disqualification — and that payload was a single egg.

On June 19, seven middle school and high school students from Russellville City Schools in Alabama took home first place in the International Rocketry Challenge at the 2015 Paris Air Show. They competed against just two other teams — the top rocket squads from Great Britain and France — but before that, they beat out more than 700 teams in their regional competition and 101 in the Team America Rocketry Challenge (TARC) nationals.

To succeed time after time, the students had to make the volatile rocket launches as predictable as possible. They were constantly adjusting their launches, adapting to deal with hot and humid weather where they first built the rockets, in Alabama, to cool, foggy early morning launches in Washington for the TARC finals and the final competition in Paris. [Amazing Rocket Launch Photos of 2014 (Gallery)]

And the rockets constantly kept them on their toes:

"About four days before we got ready to leave for Paris, we crashed three rockets in a row, and those were the rockets we were planning on using," Andrew Heath, a rising high school senior and captain of the Russellville team, told Space.com. "So we had to build two more rockets. The day before we flew out, we had to go out, and we launched eight or nine times one day to try to get enough data to be prepared."

Despite the setback, in the final competition the team launched to an altitude of 824 feet (251 m) — a slight miscalculation due to the weather conditions, Heath said — and recovered the egg without a scratch on it. The students also gave a presentation to international judges on the rocket's design.

Each of the seven members took on a different role for the challenge. These roles included designing, modeling and building the rockets, building the recovery and launch systems as well as the wiring and simulation, and gathering the all-important data.

"I write down barometric pressure, wind speed, humidity, temperature, wind direction, weight of the rocket," said Cady Studdard, a rising ninth grader on the team. "I write down the parachute size, how much the egg weighs, the motor we use, the rail angle, and then after we launch I write down the altitude and the flight time."

The team members range in age from 13 to 18 years old, and they are all united by a passion for math and science. Space.com spoke to students who want to be mechanical engineers, chemical engineers and aerospace engineers, and they see the skills they're learning as directly applicable to those goals.

"This is the 10th year that we've sponsored taking the TARC team to the International Air Show," said Allison Jeannotte, director of corporate affairs at the aerospace and defense company Raytheon. "Every year the team is more amazing than the last — their passion and excitement for this."

And team members are already paying forward what they've learned about engineering and construction, said their mentor, Tracy Burns: They plan to mentor younger students building rockets at a youth camp in July and speak at the Huntsville Area Rocket Association in Alabama about their experiences and how other schools can get involved.