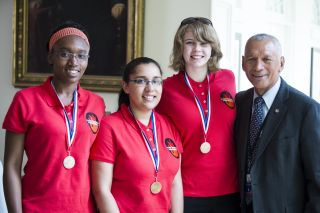 Working evenings and weekends, an all-girl team spent weeks building a small rocket that could launch and land while protecting delicate cargo inside. Their efforts earned them a spot in the recent White House Science Fair.

The three high schoolers of Team Rocket Power — sophomores Jasmyn Logan and Nia'mani Robinson and senior Rebecca Chapin-Ridgley — built a rocket that flew more than 750 feet (229 meters) and back in less than a minute. It returned itss payload of two raw eggs undamaged, floating softly back to Earth beneath two parachutes.

The Maryland team competed at the Team America Rocketry Challenge earlier this year and was one of 100 teams from several competitions invited to showcase their projects at the White House.

"At NASA, women are not only astronauts; they also run science missions. They engineer and build our many spacecraft," NASA administrator Charles Bolden, who attended the event, wrote on his blog.

"Our chief financial officer, chief scientist and one of our field center directors are women. They are program managers, budget analysts and communicators," Bolden added. "They serve in every capacity and continue to prove something we all know — as Amelia Earhart famously said, men and women are equal 'in jobs requiring intelligence, coordination, speed, coolness and willpower.' "

This year's White House science fair focused on the achievements of girls and women in science, technology, education and mathematics (STEM). Also on May 27, Bolden announced a NASA partnership with the free online Khan Academy to create tutorials in these fields.