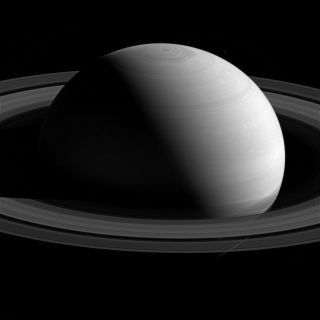 Saturn (imaged here by the Cassini spacecraft) is often hard to spot in the night sky, but look for it tonight just after sunset.
(Image: © NASA/JPL-Caltech/Space Science Institute)

If you've ever struggled to identify Saturn in the night sky, be sure to look up tonight to get a clear view of the ringed planet.

About one hour after sunset, look toward the south-southeast sky to find the waxing gibbous moon. And hovering just a couple of degrees to the moon’s lower right you’ll see a bright yellowish-white "star" shining with a steady glow. And that will be Saturn.

Finding Saturn can often be a challenge for new stargazers. To the naked eye, Saturn really isn’t all that distinct, and many neophytes to astronomy may have over looked it without knowing exactly what it is. A nearby benchmark would certainly help to guide stargazers to it, and tonight the moon will serve that purpose. [Photos: Saturn's Glorious Rings Up Close]

Often when I’m at a star party or giving a talk in the Space Theater of New York’s Hayden Planetarium, somebody will come up to me, tell me that they’ve recently purchased a telescope and then, in somewhat exasperated tones, say that they have yet to see the one object they’ve always wanted to see: Saturn.

Saturn is different than the moon and some of the other planets, which are often easy to identify. Case in point: Right now Venus and Jupiter can be immediately identified in the western sky after sunset, partly by their close proximity to one another as well as by their great brilliance. And when Mars is close to Earth and radiating brightly, we can immediately recognize it by its distinctive fiery orange color.

Tonight will provide stargazers with an opportunity to easily identify Saturn. If clouds obscure your view tonight, don’t fret. You’ll have another chance to see the moon near to Saturn on Saturday evening, July 25th (although the two will not be quite as close as they are tonight).

Saturn can be seen with the naked eye, but to see Saturn's rings requires a telescope with at least 30x magnification. A four-inch telescope at 100X or an 8-inch telescope at 200X will provide a memorable view of the "lord of the rings." The rings consist of billions of particles ranging in size from grains of sand to small mountains. They are composed primarily of water ice, which accounts for their very high reflectivity.

Right now, the north side of the rings are tilted 24-degrees toward Earth. They haven’t been this wide-open since the summer of 2004, so now is a good time to check them out.

Incidentally, this is also the best time to look at the moon with binoculars or a telescope because it offers more viewing comfort to the eye as opposed to a full moon. Using a telescope with small optical power (magnifications of 20x to 40x), or even with good binoculars, you can see a wealth of detail on the moon's surface. Around those times when the Moon is half-lit or in a gibbous phase, those features lying close to the terminator — the line separating the light and dark part of the moon — stand out in sharp, clear relief.