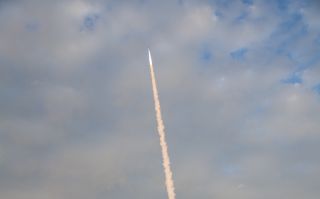 "Through RockOn and RockSat-C, students are learning and applying skills required to develop experiments for suborbital rocket flight," NASA officials wrote in a statement about the flight. "In addition, middle school educators through the Wallops Rocket Academy for Teachers (WRATS) are learning about applying rocketry basics in their curriculum."

RockSat-C and RockOn are both programs of the Colorado Space Grant Consortium, which aims to make space accessible to students. RockSat-C features a competition for to get payloads aboard rockets, similar to what students would face as scientists in the field.

"The RockSat-C program actively engages the students through full design-process mentoring, assisting them through the design phase in the fall semester … and leading the teams through testing and integration reviews and Launch Readiness Review in the spring," the consortium wrote on its website.

The payload aboard the Orion rocket descended by parachute into the Atlantic Ocean off the coast of Wallops, and recovery was in progress when NASA released its statement yesterday (June 25).

Suborbital rockets are often used to provide cheap access to space for experiments. They usually provide a few minutes of weightlessness at the peak of the flight, allowing for brief experiments in microgravity to go forward.

Another option for going high in the atmosphere — although not to space itself — is via high-altitude balloon. Over the past few years, models such as a "Star Wars" X-Wing fighter, a Lego minifigure and the USS Enterprise from "Star Trek" have all ridden balloons to near-space..

NASA's next scheduled flight from Wallops is a Black Brant IX suborbital sounding rocket, which is expected to launch July 7.