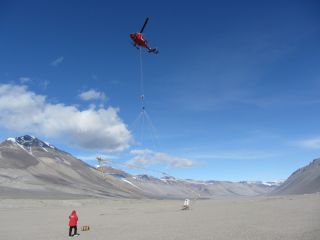 One of the coldest, driest deserts on the planet, Antarctica's McMurdo Dry Valleys may look like a frozen wasteland, but compelling new evidence shows that beneath the surface lies a salty aquifer that may support life. The environment is a possible analog for conditions beneath the surface of Mars, and other desolate locales in the solar system.

With funding from the U.S. National Science Foundation, Jill Mikucki, a microbiology assistant professor at the University of Texas and Slawek Tulaczyk, a professor of Earth science at the University of California, Santa Cruz, were part of a team that detected extensive salty groundwater networks in Antarctica using a novel airborne electromagnetic mapping sensor system called SkyTEM.

In a podcast for NSF's Science360, Jill and Slawek talk about SkyTEM, their research results, and their time on Antarctica's McMurdo Dry Valleys. [How Earth's 'Extremophiles' Could Aid Alien Life Search ]

"The most striking part of being there is the lack of vegetation and the landscape that is made out of sediment rock and ice. It's somewhere between being on a different planet with the benefit of still breathing air, and traveling back in time before Earth had vegetation cover," said Tulaczyk. [Hunting for 'Worms From Hell': One Reporter's Journey ]

To learn more about this new discovery and SkyTem, the paper, "Deep groundwater and potential subsurface habitats beneath an Antarctic dry valley," was published on April 28, 2015, in the open-access journal Nature Communications.