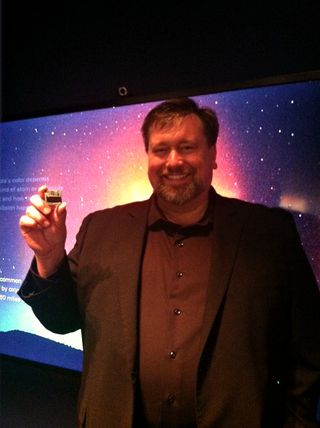 At the Intrepid Air and Space Museum in New York City, Mason Peck holds up a Sprite, a microsatellite he and his students developed to launch into space.

NEW YORK – Astronomy lovers in New York City fought their way through evening rush hour on May 5 to make their way to Manhattan's western edge for an astronomy event under the stars.

The event, called Astronomy on Deck, was hosted by The Intrepid Sea, Air & Space Museum, which is housed in the legendary aircraft carrier. Those in attendance sat under cover of the space shuttle Enterprise, NASA's first space shuttle, and one of the museum's many attractions.

Despite cloud cover that kept visitors from peering through telescopes set up on the museum's flight deck, the astronomy night was still a success, thanks to an engaging talk by Mason Peck, director of Cornell University’s Space System's Design Studio and NASA's former chief technologist, who spoke to the crowd about opportunities for non-scientists to send their own satellites into space. [Photos: NYC Museum's Space Shuttle Enterprise Exhibit]

Peck has a degree in British literature, so it was fitting for him to open his talk with a rather poetic quote: "Scientists discover the world that exists, engineers build the world that never was."

The man who spoke those words, Theodore von Karman, was an aerospace engineer and may have used this observation to describe the merits of engineering over science. But Peck instead focused on the need for scientists and engineers to work together to build the future of space exploration.

That collaboration, he said, often begins with a budding aerospace engineer tinkering in a dank, sunless basement.

Audience members sat glued to their seats (or, since astronomy night drew a larger crowd than the museum had chairs to offer, to the floor) to learn one thing: how to build a spacecraft.

No, Peck wasn't suggesting that citizens build spaceships large enough to launch themselves and their closest friends into space — only Bruce Wayne would have the funds to pull that off. But Peck does believe that everyone who is interested will someday have the opportunity to send their own tiny DIY satellite into orbit.

Peck and his students have already launched their own satellite — a project developed by Cornell graduate student Zach Manchester called KickSat. The project was funded entirely through Kickstarter donations, and launched in early 2014 on a spacecraft carrying supplies to the ISS. KickSat carried more than 100 tiny "cracker-size" satellites called Sprites, each with the capability to send a message a few bytes long to ground stations.

Unfortunately, KickSat suffered a series of setbacks that sent it too close to Earth’s atmosphere, burning up every Sprite before they could be released. But that didn't deter Peck or Manchester — they're currently working to get KickSat 2 ready for launch.

While he's hard at work, Peck encourages other people to get started making their own experiments and satellites to send into space.

He suggests starting with a cubesat, tiny, cube satellites — roughly the size of a slice of bread on each side. Parts can be bought online and instructions can be found on websites like CubeSat Kit and DIY Space Exploration.

Launching a cubesat costs about as much as purchasing an expensive car, according to Peck, which he said he realizes is "still quite expensive" for the average person.

Students and scientists at universities around the U.S. can apply to the NASA CubeSat Launch Initiative, which helped Peck and Manchester launch KickSat. The program allows participants to launch their DIY spacecraft in extra space on previously planned missions. Peck says the initiative accepts about half of the satellites submitted for launch.

That doesn't mean all hope is lost for nonacademics, however. Peck says he and other astronomy professors would be glad to help with citizen scientists with satellite projects.