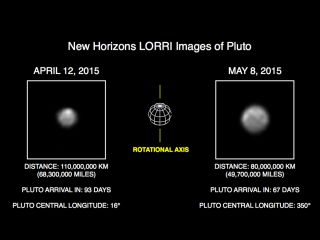 This image taken on May 8, 2015, shows Pluto in the latest series of New Horizons Long Range Reconnaissance Imager (LORRI) photos, compared to a LORRI image taken on April 12.
(Image: © NASA/JHU-APL/SwRI)

NASA's New Horizons probe, which will make the first-ever flyby of Pluto on July 14, captured the images with its long-range camera from May 8 through May 12, when the spacecraft was a bit less than 50 million miles (80 million kilometers) from the dwarf planet.

"These new images show us that Pluto's differing faces are each distinct, likely hinting at what may be very complex surface geology or variations in surface composition from place to place," New Horizons principal investigator Alan Stern, of the Southwest Research Institute in Boulder, Colorado, said in a statement. [See the latest Pluto photos by New Horizons]

"These images also continue to support the hypothesis that Pluto has a polar cap whose extent varies with longitude," Stern added. "We’ll be able to make a definitive determination of the polar bright region’s iciness when we get compositional spectroscopy of that region in July."

Mission scientists first noticed the surface variations, which manifest as patches of differing brightness, in images New Horizons took in mid-April, when the probe was about 70 million miles (113 million km) from Pluto. The new photos are more detailed, depicting Pluto with twice as many pixels as last month's images did, NASA officials said.

New Horizons' Pluto views will keep getting better, of course, with the highlight coming on July 14, when the spacecraft cruises just 7,800 miles (12,500 km) from the dwarf planet's surface. Closest-approach images will be about 5,000 times sharper than the May 8 to May 12 photos, mission scientists said.

"As New Horizons closes in on Pluto, it's transforming from a point of light to a planetary object of intense interest," Jim Green, director of NASA's Planetary Science division, said in the same statement. "We're in for an exciting ride for the next seven weeks."

The $700 million New Horizons mission launched in January 2006, tasked with returning the first-ever good looks at Pluto. The spacecraft is now about 2.95 billion miles (4.75 billion km) from Earth and is getting about 750,000 miles (1.2 million km) closer to Pluto every day.