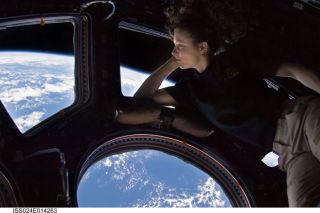 NASA astronaut Tracy Caldwell Dyson, Expedition 24 flight engineer, looks through a window in the Cupola of the International Space Station. A blue and white part of Earth and the blackness of space are visible through the windows. The image was a self-portrait using natural light.
(Image: © NASA/Tracy Caldwell Dyson)

Tim DeBenedictis is the lead developer of the SkySafari line of iOS and Android apps at Simulation Curriculum, the makers of Starry Night, SkySafari and the free Pluto Safari app. DeBenedictis has been writing astronomy software since high school, and graduated from MIT in 1993 with a degree in earth, atmospheric and planetary science. Passionate about space, DeBenedictis is self-taught in mechanical and electrical engineering, and has launched his own private microsatellite into space. He contributed this article to Space.com's Expert Voices: Op-Ed & Insights.

On July 14, NASA's New Horizons spacecraft will fly by Pluto. That will be among NASA's most impressive achievements to date — but what might come next?

Suppose, this coming July, that New Horizons were to discover something truly wild as it flashed past Pluto. What if it revealed a bizarre surface chemistry that, like the oxygen in Earth's atmosphere, could only be the result of some biological process? What if its imager were to record a clearly artificial set of markings on its surface, a giant pyramid or the ruins of an alien civilization? (That's about as likely as revealing a large, goofy-smiling dog, but it's still fun to consider.)

If New Horizons were to make a monumental discovery, NASA might very well skip the next logical step of a robotic Pluto lander, and instead launch a manned mission. Is a manned Pluto mission within humanity's near-term technological grasp, at any cost

The most advanced propulsion systems we have today require 10 to 15 years to deliver a 1.6-kilogram (3.5 lbs.) spacecraft into Pluto orbit. Although it lacks significant propulsion, the International Space Station (ISS) has been continuously orbiting the Earth, manned, since Oct. 31, 2000. There is, of course, an enormous difference between the ISS and a manned Pluto spacecraft. The ISS has been resupplied and occupied by rotating crews from Earth's surface several times per year for the past 14 years. In contrast, Pluto astronauts would be utterly isolated, and their life-support systems would have to be completely self-contained. The longest period one human being has ever spent in space is 437 days. And no small, closed, self-contained biosphere capable of supporting human life has survived more than two years in space. [What Would It Be Like to Live on Pluto? ]

What if we put our Pluto-bound astronauts into hibernation? Aside from the possibility that the mission-control computer becoming homicidal during the wake-up phase, there's another obstacle: Scientists don't currently know how to let human beings hibernate and have them wake up alive. For that reason, let's relegate hibernation scenarios to science fiction, and rely on technologies known at the present time.

Is there any known spacecraft propulsion technology capable of delivering a multihundred-ton manned mission to Pluto within a year? It turns out that the answer is yes, and that the technology has been around since the 1950s.

Science-fiction buffs reading this piece will probably have guessed that the answer is Project Orion. For everyone else, the concept is to propel the spacecraft by exploding thousands of small nuclear bombs behind it. Each detonation drives a "pusher plate" attached to the spacecraft by an enormous set of shock absorbers. The exhaust velocities are tens to hundreds of kilometers per second, but with millions of tons of thrust.

The original Project Orion physicists worked out the essentials in the early 1960s. NASA revisited the concept again in 2000 — this time, under the name External Pulsed Plasma Propulsion. The smallest nuclear spacecraft would have a mass of about 900 tons, though the original team developed an advanced interplanetary configuration capable of delivering a 10,000-ton spacecraft to Saturn and back again in three years. While such a spacecraft could be launched directly from the Earth's surface, nuclear fallout concerns would make this course of action untenable. Instead, it would have to be constructed in Earth orbit — like the ISS — and depart for Pluto from there.

A year or two later, the nuclear-bomb-firing mother ship would decelerate into orbit around Pluto, and turn off its engines. A manned descent to Pluto's surface would use more conventional chemical rockets. Pluto's surface gravity is about 1/12 of Earth's, or half of the moon's. Landing on Pluto's surface from a low orbit at an altitude of 100 kilometers (62 miles) requires half the delta-V of a landing on the moon from the same height (800 meters per second versus 1,700 m/s).

Touching down on Pluto

Landing any spacecraft — let alone a manned spacecraft — on Pluto would present some unique challenges. Unlike the moon, Pluto has a thin atmosphere of nitrogen, methane and carbon monoxide. Its surface pressure varies from 6.5 to 24 microbars —about as thick as Earth's atmosphere 50 miles (80 km) up, or about 1/1000 the density of Mars' atmosphere at its surface. This is probably just enough to require some kind of heat shield, but not enough to provide any useful aerobraking capability (like a parachute).

SpaceX's Dragon V2 capsule  combines a heat shield with propulsive landing rockets, and is probably a step in the right direction. The Dragon V2 stores enough fuel for 300 m/s delta-V, so extra fuel tanks would be needed to land, take off and rendezvous with the orbiting mother ship. But the technology seems feasible.

There might be other hazards. The moon's surface is made mostly of silicate rock. Pluto, on the other hand, is covered with ice — not just water ice, but frozen methane, carbon monoxide and nitrogen. On contact with hot rocket exhaust at several thousand degrees, there's a real danger that the landing site might vaporize. Some care would have to be taken to land the first Pluto explorers on a stable, rocky outcropping.

The view from Pluto

Imagine you're one of those first Pluto explorers, stepping out of your lander. Pluto's moon Charon would hang motionless in your sky. The two are tidally locked, always presenting the same face to each other as they orbit over a 6.37 Earth-day period. But at only 12,200 miles (19,600 km) away — closer than Earth's geosynchronous satellites — Charon would appear nine times larger in Pluto's sky than the full moon appears from Earth. Pluto's other four moons — Nix, Hydra, Kerberos and Styx — would be visible as slowly moving stars, gradually rising and setting while Charon remained fixed in the heavens.

The sun would be the brightest object in the sky but would look nothing like it does in ours. Pluto's sun is only an arc minute across, and would appear starlike. But what a star! At magnitude minus 19, it would appear 650 times brighter than our full moon, with all that brightness packed into an icy, diamondlike point.

Jupiter would be the brightest planet in the sky, at around magnitude 2.5, somewhat fainter than the stars in the Big Dipper. Saturn would vary in and out of naked-eye visibility, from about magnitude 4.5 to magnitude 8.5.

And if you were to look carefully, about three full-moon diameters away from the starlike burning sun, you might notice another, much fainter, bluish "star." That pale blue dot would be Earth — at magnitude 3.7, it would still be visible to your unaided eye but would be difficult to pick out from the sun's glare. That's home. You've come a long way to this cold, lonely outpost at the edge of the solar system. And unlike New Horizons, you're coming back.

Science fiction? Possibly. But let's not forget that Pluto was discovered only 85 years ago. Today, a spacecraft carrying the ashes of its discoverer is speeding toward that planet — a feat unimaginable in 1930. What will the next 85 years bring? If there's anything you should count on, it's not to count anything out.

With the Pluto Safari app, users can simulate the July 14 flyby of Pluto, get regular mission news updates, and learn the history of Pluto. Follow Simulation Curriculum on Twitter @SkySafariAstro, Facebook and Instagram. Follow all of the Expert Voices issues and debates — and become part of the discussion — on Facebook, Twitter and Google+. The views expressed are those of the author and do not necessarily reflect the views of the publisher. This version of the article was originally published on Space.com.