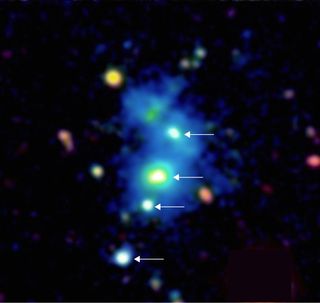 This image shows a rare view of four quasars, indicated by white arrows, found together by astronomers using the Keck Observatory in Hawaii. The bright galactic nuclei are embedded in a giant nebula of cool, dense gas visible in the image as a blue haze.
(Image: © Hennawi & Arrigoni-Battaia, MPIA)

A giant nebula in the early universe hits the jackpot when it comes to rare, bright objects known as quasars, boasting four within surprisingly close proximity to one another. The first known quasar quartet lies in a cloud of cool gas that could provide a clue to the objects' unusual closeness.

"Multiple-quasar systems are rare, because quasars themselves are rare," Joseph Hennawi, of the Max Planck Institute for Astronomy in Germany, told Space.com by email.

"The typical distance between any two quasars is about 100 million light-years, whereas we found four quasars within 700,000 light-years of each other," he said. "The … probability of that occurring is extremely small — about 1 in 10 million odds." [The Strangest Things in Space]

The center of every galaxy boasts a supermassive black hole millions of times the mass of the sun. Material swirling around the rim of the black hole travels near the speed of light, emitting an enormous amount of energy before it is consumed. If the supply is large enough, it enters the quasar phase of its evolution, far outshining its parent galaxy to become one of the brightest objects in the universe.

But the lives of quasars are extremely brief; according to Hennawi, a quasar shines somewhere between 10 million to 100 million years in the 10-billion-year lifetime of a galaxy. This makes the objects extremely rare and hard to find. Discovering four so close together came as something of a shock.

Hennawi and his colleagues were studying 29 quasars in search of a nebula of cool hydrogen gas, known as Lyman-α (Lyman-alpha) nebulae, surrounding them. The bright light of a quasar can illuminate the gas around it, helping astronomers to better understand the properties of the gas.

Selecting one likely candidate, the team trained a Keck telescope in Hawaii on the object, and found one of the largest and brightest Lyman-α nebulae yet discovered. Inside the cloud of gas, the researchers identified not one but four tightly packed quasars, all lying surprisingly close together.

Nearly 500,000 quasars have been identified so far, but scientists know of only about a hundred binary quasars. Two triple quasar systems have been found since 2007. This, however, is the first known quadruple-quasar system.

The research is published online today (May 14) in the journal Science.

While it is possible that the researchers simply lucked out — indeed, they dubbed the cool dense cloud of gas the "Jackpot Nebula" — Hennawi said it is more likely that the discovery reveals more about how quasars might form.

"The primary significance of the quadruple-quasar system is the extremely low probability of a discovery like this occurring by chance, according to our current understanding of the abundance of quasars," Hennawi said.

"We thus either have to conclude that we got really lucky — 1 in 10 million [odds] — or that quasar activity is much more likely to occur in certain environments. That, in turn, could be an important piece of the puzzle for understanding what makes a galaxy turn on as a quasar."

The nebula that's home to the four quasars sits within a protocluster, a forerunner of a galaxy cluster like those that exist today. The light took about 10 billion years to reach scientists today, so they are seeing the protocluster as it existed in the early universe (which is only about 13.7 billion years old).

The protocluster itself is somewhat unusual, containing up to 20 times more galaxies than other already-dense objects of the same type. It also contains a giant nebula of cool gas that Hennawi said is at odds with current theories of how protoclusters should form. These unusual clouds, which have been seen in other protoclusters, may have something to do with the formation of the quadruple-quasar system.

The quartet itself is one of the few quasar systems to reside in a protocluster; a handful of rare quasars and at least one known typical quasars can also be found in protoclusters and are almost always associated with Lyman-α clouds of gas.

"We speculate that the likelihood of quasar activity may be highly enhanced in this object because of the massive amount of cool, dense gas, which would be related to fueling the quasars," Hennawi said.

Although the quadruple quasar sits in a dense group of galaxies, Hennawi says that there is no sign that previously discovered multi-quasar systems lie in extreme environments. However, the environments of these systems have not been characterized that well. Of the handful of giant nebulae found around quasars, several are related to multiple-quasar systems.

He said that the next step is to try to find more of these giant emission clouds by searching for them around individual quasars, something that the new results suggest is easier than previously thought.

"One important result of our study is that we showed that about 10 percent of all the bright quasars in the distant universe have these giant nebulae around them," Hennawi said.

"If we go out and find a sample of 10 to 20 giant nebulae, we can determine how often they are associated with multiple quasars [and] how often they trace protoclusters, and [we can] also study other properties."