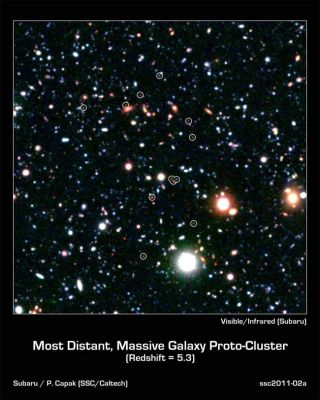 This extremely distant protocluster represents a group of galaxies forming very early in the universe, about only a billion years after the Big Bang.
(Image: © Subaru/ P. Capak (SSC/Caltech))

Astronomers have glimpsed a 'protocluster' of galaxies as they appeared only a billion years after the Big Bang, making it the most distant galaxy cluster yet seen, a report in today's issue of the journal Nature announced.

Using a slew of telescopes, including NASA's Spitzer, Chandra and Hubble space observatories, and the Keck telescope in Hawaii, Peter Capak of California Institute of Technology and his team were able to locate the beginnings of a cluster of galaxies from very early in the universe.

A galaxy cluster is a grouping of hundreds of individual galaxies bound together by gravity. A typical cluster contains between 50 and 1000 galaxies, with a mass ranging from 100 trillion to 1 quadrillion times the mass of the sun. The Milky Way is part of a galaxy cluster known as the Virgo Cluster, which contains roughly 2,000 galaxies.

But finding and studying the birthplace of these regions is difficult. Early protoclusters are rare, and challenging to locate. Astronomers must look very far away, so that they are viewing objects whose light has taken billions of years to travel to Earth, thus presenting them with a window back in time.

"In an area 16 times the size of the full moon, we can expect to find only two to five protoclusters," Capak told SPACE.com

Lighting up the dark

To hunt down protoclusters, Capak and his colleagues searched for brighter, easier-to-find objects such as quasars, starbursts, and massive galaxies — all of which could indicate the presence of a young galaxy cluster. They searched in the same area of the sky studied by the Cosmic Evolution Survey (COSMOS).

Within the field, they found a galaxy called AzTEC-3 that was forming stars at a rapid pace, and a quasar – a bright outpouring of light that occurs when mass falls into a black hole.

Like all starburst galaxies, AzTEC-3 has an exceptionally high rate of star formation. Massive stars are created from the abundant gas within the galaxy, burning quickly and brightly, and often exploding as supernovas. This makes starburst galaxies among the brightest galaxies around.

Also in close range lies a quasar, a compact region in a massive galaxy powered by its supermassive black hole. Formed around black hole accretion disks, quasars can outshine the galaxy they inhabit, and are the most luminous objects in the universe.

Because of their high luminosity, starbursts and quasars are relatively easy to locate in the night sky. In order to function, both require space dense with gas and other materials. They tend not to exist in isolation, but rather in heavily populated areas.

"These types of regions are associated with clusters and protoclusters," Capak told said. "Around this system, we found eleven times more galaxies than you would expect in a random area of the sky."

Because of the time it took this object's light to travel to us, astronomers saw it as it was only a billion years after the Big Bang.

Studying the environment around the protocluster helps astronomers understand what led to its creation. Similarly, the interactions within the protocluster reveal a great deal about cluster formation at the beginning of the universe.

"What's particularly interesting about this one is that we can characterize what's going on," Capak said. "We can get an idea of what the conditions were in early protoclusters."