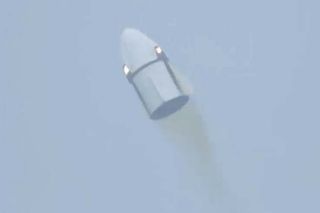 A SpaceX Dragon crew capsule prototype streaks into the sky during a launch abort system test on May 6, 2015 from Cape Canaveral Air Force Station in Florida.
(Image: © NASA TV)

Russia's failed Progress 59 cargo spacecraft fell back to Earth, SpaceX's Dragon crew capsule launched on its first big test and the sun fired off its most powerful flare of 2015 so far. Here's a look at Space.com's top stories of the week.

SpaceX launched a major test Wednesday (May 5) of the innovative rocket escape system for its manned Dragon spaceships, a critical system designed to save astronauts in a launch emergency. [Full Story: SpaceX Tests 'Revolutionary' Dragon Launch Escape System to Save Astronauts]

The sun unleashed its most intense flare of the year Tuesday (May 5), a monstrous blast that caused temporary radio blackouts throughout the Pacific region. [Full Story: Sun Unleashes Most Powerful Solar Flare of 2015 (Video)]

Interesting news out of NASA's Johnson Space Center this week: A group of researchers has reportedly tested an electromagnetic propulsion drive that could potentially facilitate practical space travel in and around the solar system. [Full Story: Is NASA Moving Toward a Hyperspace Drive?]

The Milky Way is much bigger than we thought

A galaxy far, far away — farther, in fact, than any other known galaxy — has been measured by astronomers. The galaxy EGS-zs8-1 lies 13.1 billion light-years from Earth, the largest distance ever measured between Earth and another galaxy. [Full Story: This Galaxy Far, Far Away Is the Farthest One Yet Found]

The nascent asteroid-mining industry is set to take its first steps into space this summer. Planetary Resources' Arkyd-3R probe currently sits aboard the International Space Station and is scheduled to be deployed sometime in July. [Full Story: Asteroid-Mining Company to Deploy 1st Satellite This Summer]

Chemical reactions that free up energy that could potentially support a biosphere have occurred — and perhaps still are occurring — deep within the Saturn moon Enceladus' salty subsurface ocean, a new study suggests. [Full Story: Ocean on Saturn Moon Enceladus May Have Potential Energy Source to Support Life]

Does the manned path to Mars could go through tiny moon Phobos?