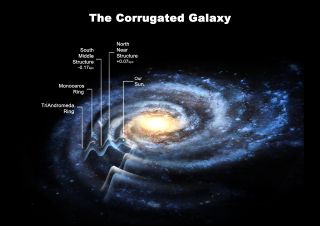 The disk of the Milky Way Galaxy disk may actually be rippled.
(Image: © Heidi Newberg)

Two ringlike structures of stars wrapping around the Milky Way's outer disk now appear to belong to the disk itself.

The results, outlined in a new study, show that the disk is about 60 percent larger than previously thought. Not only do the results extend the size of the Milky Way, they also reveal a rippling pattern, which raises intriguing questions about what sent wavelike fluctuations rippling through the disk.

The researchers said the likely culprit was a dwarf galaxy. It might have plunged through the Milky Way's center long ago, sparking the rippling patterns astronomers have now detected for the first time. [When Galaxies Collide: Photos of Great Galactic Crashes]

Roughly 15 years ago, Heidi Newberg, an astronomer at the Rensselaer Polytechnic Institute in New York, and her colleagues found a group of stars beyond the disk's outermost edge. The so-called Monoceros Ring is about 60,000 light-years from the galactic center (just beyond where the disk was thought to end at 50,000 light-years).

Over the years, astronomers were divided into two camps regarding the origins of the ring. Some argued that it was simply a tidal stream: The debris of a dwarf galaxy that fell into the Milky Way and was stretched in the process. Others argued that the ring is a part of the disk. The issue, however, is that the ring is slightly above the plane of the disk. So astronomers in the latter camp attributed that to the fact that the disk flares up toward the edge.

Enter Yan Xu, an astronomer at the National Astronomical Observatories of China. Xu, Newberg and colleagues took a second look at the problem using data from the Sloan Digital Sky Survey. With improved data compared to previous studies, they found four total structures in and just outside what is currently considered the Milky Way's outer disk. The third structure was the highly debated Monoceros ring, and the fourth structure was the Triangulum Andromeda Stream, located 70,000 light-years from the galactic center.

"We didn't know how a disk could go up and down," said Newberg. Luckily, computer simulations by various teams showed that a dwarf galaxy falling into the Milky Way might create a similar pattern. "When it goes through, it can disturb the disk just like a pebble disturbs water in a puddle," said Newberg. "And that wave can propagate through the disk from that event."

This new picture makes sense, said Newberg. It even matches observations of the gases in the disk, which have long been observed as rippled. But the implications extend far beyond a corrugated disk.

"If it's true that the Monoceros Ring and the Triangulum Andromeda structure are part of this oscillatory pattern, then the stellar disk goes out way further than the textbook tells us it ought to be," said Newberg. Instead of extending nearly 100,000 light-years from one side to the other, it would be more like 160,000 light-years wide.

This brings the Milky Way's size up to that of Andromeda. The Milky Way's small radius in comparison to Andromeda's larger radius has always puzzled astronomers, because the two galaxies have roughly the same mass.

The team plans to further map the rippled disk of Earth's galaxy and better match their results to models.

The study was detailed in the March 10 edition of the Astrophysical Journal.