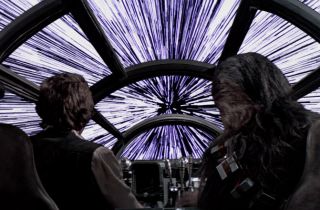 Interesting news out of NASA's Johnson Space Center this week: A group of researchers has reportedly tested an electromagnetic (EM) propulsion drive that could potentially facilitate practical space travel in and around the solar system.

According to a report from industry watcher NASASpaceFlight.com, the EM drive could take a spacecraft to the moon in a matter of hours, and a trip to Mars in 70 days. It's not exactly a hyperspace drive, but it's surely a step in the right direction.

The idea of an EM drive  isn't new — scientists in the American, British and Chinese space programs have been investigating the concept for a while.

The basic gist — it gets complicated — is to create a form of propulsion that doesn't require the use of propellant. Instead, electromagnetic microwaves are bounced around a conical cavity in such a way that electrical energy is converted directly into thrust.

The technology is largely theoretical, but initial test results have been officially presented, by both NASA and Chinese space agencies. The idea is also quite controversial, since it seems to violate certain Newtonian law of physics.

According to the report, the significance of the new research is that NASA has successfully tested EM propulsion in a hard vacuum for the first time. Previous tests were conducted in atmospheric conditions.

Bear in mind that none of this information is coming from NASA directly, and the numbers regarding solar system travel come from the extremely busy forums at NASASpaceFlight.com.

But it's clear that EM drive research is ongoing at several different agencies, those forums are legit, and hey, sometimes news does leak out through unofficial channels. Just ask — oh, I don’t know — every single government agency on the planet.