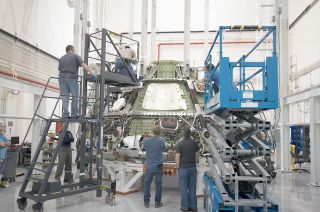 NASA's Orion Exploration Flight Test-1 (EFT-1) spacecraft is seen after its heat shield and backshell have been removed post-flight. An auction winner will get to see the capsule firsthand.
(Image: © NASA)

Since splashing down after its historic test flight last December, NASA's first Orion capsule to launch into space has been, for the most part, out of public sight. Now, an auction benefiting students is offering the chance for two lucky people to go behind-the-scenes and see the Orion spacecraft up close.

The Astronaut Scholarship Foundation (ASF), founded by the Mercury astronauts in 1984 to award college students who are excelling in science and engineering degrees, is auctioning access to the Orion as part of its annual Spring sale of astronaut memorabilia and experiences.

"You and a guest will join Hugh Harris, the legendary voice of NASA, for a private behind-the-scenes tour of Kennedy Space Center and the Orion!" the foundation states on its auction website.

The private tour, which is the one of five experiences and 27 astronaut artifacts now up for bid, offers the winner and a guest rare access to the Neil Armstrong Operations and Checkout (O&C) Building at Kennedy in Florida, where the Orion spacecraft is still undergoing post-flight analysis by its contractor Lockheed Martin and where it will be readied for its next test flight in 2018.

On Dec. 5, 2014, the Orion lifted off on a United Launch Alliance Delta IV Heavy rocket from Cape Canaveral for NASA's Exploration Flight Test-1 (EFT-1). The unmanned capsule completed two orbits of the Earth while reaching an altitude last achieved by the Apollo missions. The flight tested the Orion's heat shield, as well as its avionics and recovery systems. [See photos from Orion's first test flight]

NASA and Lockheed Martin are building the Orion to take astronauts further out into the solar system, to the vicinity of the moon, an asteroid and ultimately to Mars.

Recovered by the U.S. Navy off the coast of California, the Orion EFT-1 capsule was delivered back to Florida on Dec. 18. Since then, engineers have removed the craft's heat shield, the largest of its kind ever flown, and shipped it to NASA's Marshall Space Flight Center in Alabama for study. The Orion's thermal tile-covered backshell was also removed, exposing the spacecraft's sensors and systems.

In addition to touring the O&C, which historically was used by NASA to prepare Apollo command and lunar modules for launch in the 1960s, the high bidder will also be guided by Harris through the Space Shuttle Atlantis exhibit at the Kennedy Space Center Visitor Complex.

Harris, whose career with NASA began in 1963, provided the broadcast commentary for approximately 100 crewed and expendable rocket launches. From 1992 to 1998, he served as Kennedy's director of public affairs.

The winning bidder will also have lunch with an astronaut, see the new 3D large-format film "Journey to Space," and have the chance to see one of the last remaining Saturn V moon rockets.

According to the ASF, the tour date will be based on when access to the Orion is available. The tour is only open to U.S. citizens.

Other highlights from the auction include the opportunity to attend to a Boston Red Sox baseball game with a shuttle astronaut, a schematic flown aboard Gemini 5 in 1965 and a sweater worn by commander Dick Covey during the first Hubble Space Telescope servicing mission.

For more information or to bid, see: www.astronautscholarship.org/2015spring_auction