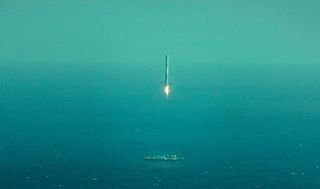 SpaceX performed another high-profile rocket reusability test Tuesday (April 14) during the launch of its Dragon cargo capsule toward the International Space Station. The first stage of the company's Falcon 9 rocket came back down to Earth and nearly pulled off a soft landing on an "autonomous spaceport drone ship" in the Atlantic Ocean.

SpaceX also tried such a rocket landing in January, during the launch of the previous Dragon cargo mission. The Falcon 9 hit its target on that occasion as well, but came down too hard, exploding on the ship's deck.

The California-based company will keep trying until it aces the drone-ship landings, and then it will keep pushing the envelope. SpaceX eventually aims to land its rockets on the ground, near their launch pads, so they can be inspected and outfitted for re-flight with a minimum of fuss and expense.

It's all part of SpaceX's plan to slash the cost of spaceflight and open the heavens up to exploration.

"I think the implications are huge," Hans Koenigsmann, SpaceX's vice president of mission assurance, said of reusable-rocket technology during a prelaunch news conference on Sunday (April 12). "In the long term, this might change completely how we approach transportation to space."

"In this approach, when the booster is done and you are finished with the rocket engines, we will cut them off. We will return them to the Earth using an advanced, inflatable, hypersonic heat shield. And then, with a very low, simplified logistics footprint, we'll recover them in midair and return them to the factory to quickly recertify them, and then plop them under the next booster to fly," ULA CEO Tory Bruno said during a news conference Monday. "This will take up to 90 percent of the propulsion cost out of the booster."

Those first-stage engines will be BE-4s, built by the secretive spaceflight firm Blue Origin. Headed by Amazon.com founder Jeff Bezos, Blue Origin is also working to develop reusable rockets of its own, boosters that will come back to Earth in powered, vertical landings, then be refueled and reflown.

Reusability is also a priority for other firms developing crewed suborbital systems. Virgin Galactic and XCOR Aerospace, for example, are both developing reusable space planes — known as SpaceShipTwo and Lynx, respectively — to take paying passengers to suborbital space and back.