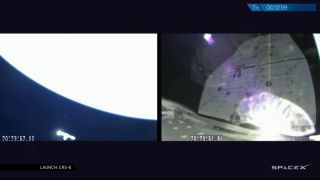 At left: SpaceX's Dragon space capsule soars over Earth in a camera view from its Falcon 9 rocket upper stage after a smooth launch on April 14, 2015. Right: A camera on Dragon shows its solar arrays unfold. Dragon may be visible in the night sky depending on your weather conditions and location.
(Image: © SpaceX)

Skywatchers across parts of the United States and southern Canada have a chance to see a Dragon capsule built by the private spaceflight company SpaceX "chase" the International Space Station across the sky this week ahead of a Friday morning rendezvous.

SpaceX launched the Dragon cargo ship into orbit on Tuesday (April 14) during its sixth commercial cargo mission for NASA. The spacecraft blasted off at 4:10 p.m. EDT (2016 GMT) from Cape Canaveral Air Force Station in Florida and is carrying more than 2 tons of supplies for the space station's six-person crew.

Weather permitting, both the unmanned Dragon and space station will be visible as separate entities, appearing as "stars" sailing across the evening's twilight sky. Dragon is expected to arrive at the space station on Friday morning (April 17) at around 7 a.m. EDT (1100 MT), meaning that by Friday evening, both will appear as a singular bright moving "star." [Launch Photos: SpaceX's Dragon Soars Into Orbit]

The station makes one full orbit of the Earth every 90 minutes. Initially, SpaceX's Dragon will trail the orbiting outpost by about 25 minutes. But by Thursday evening, that gap will have diminished to only about 1 or 2 minutes. That means it might be possible to see both space vehicles in the sky at the same time. The station would appear first, followed a minute or two later by the Dragon capsule traveling along basically the same path.

How bright will Dragon be?

Most satellites become visible only when they are in sunlight and the observer is in deep twilight or darkness. This usually means they can be spotted shortly after dusk or before dawn. Because of its size and the configuration of highly reflective solar panels, the station is now, by far, the brightest man-made object currently in orbit around Earth.

On favorable passes, the International Space Station is as brilliant as magnitude -5 in brightness, which rivals Venus and is more than 25 times brighter than Sirius, the brightest star in the night sky. Some skywatchers have even caught a glimpse of the station just prior to sunset or shortly after sunrise. And as a bonus, sunlight glinting directly off the solar panels can sometimes make the space laboratory appear to briefly flare to superbrilliance.

So, what is the viewing schedule for your hometown? There are actually several ways to try and see the station. You can easily find out by visiting one of these three websites:

Each site will ask for your ZIP code or city and return a list of suggested spotting times. Predictions computed a few days ahead of time are usually accurate within a few minutes. However, they can change due to the slow decay of the space station's orbit and periodic reboosts to higher altitudes. So you want check for updates to plan your observing night.

Another great website is n2y0.com, which provides real-time satellite tracking at any given moment.

Editor's note: If you snap a photo of the Dragon space capsule and space station in the night sky and want to share the image with Space.com for a possible story or gallery, send images and comments in to managing editor Tariq Malik at: tmalik@space.com.

SpaceX's Dragon cargo delivery mission is the sixth of at least 12 cargo missions for NASA under a deal initially worth $1.6 billion. In addition to the successful Dragon launch, SpaceX also attempted to land the first stage of its Falcon 9 rocket on a drone ship in the Atlantic Ocean as part of a reusable rocket technology program.

According to SpaceX CEO Elon Musk, the Falcon 9 rocket made it to the drone ship, but tipped over and fell due to excess sideways motion at touchdown. The failed landing try was SpaceX's third of the year, with more expected later in 2015.