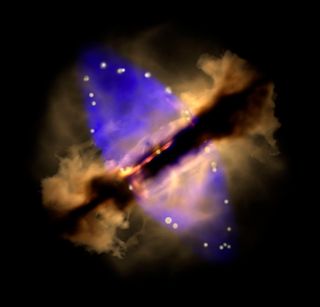 This image from a 3D simulation shows how winds from the hot, young protostar W75N(B)-VLA2 evolved from pushing material around the star in a fairly even, spherical way to a column of material that extends from the star's poles.
(Image: © Wolfgang Steffen, Instituto de Astronomia, UNAM)

A massive young star may prove to be the missing link between two stages of star formation.

While most stars have winds that pile the gas around them into columns streaming from their poles, some stars expel spherical winds of expanding material. A real-time study over almost two decades reveals for the first time a star in the process of changing from spherical winds of charged particles to streaming columns of them, linking the two structures together.

Describing how scientists understood stars with spherical expanding winds, Carlos Carrasco-González, of the Centre of Radio Astronomy and Astrophysics in Mexico, said, "We were speculating that these stars were in a younger stage, and that they would develop collimated winds in the future. But this has been proposed by theoretical works, and we had not actually obtained proof of this." [Top 10 Star Mysteries]

"With this work, we have obtained a link between the two stages, the spherical and the collimated one," Carrasco-González said.

Sunlike stars are abundant and easily observable in the galaxy, so formation theoriesabout them are fairly well established. But massive young stars remain more challenging. Because they are rare, these stars tend to lie farther from the sun, making them harder to observe in great detail. Furthermore, they are often embedded in the dusty cloudswhere they form, making them difficult to observe in the optical wavelengths for telescopes like NASA's Hubble Space Telescope.

As a result, a number of theoretical problems plague scientists' understanding of how these stars form.

"The main problem is that the strong light that arises from these massive protostarscan push out the material which is falling onto it, and at some point the star stops growing," Carrasco-González said.

According to theory, this growth ends before the star becomes the kind of behemoth that scientists observe. Yet scientists are observing these stars, so some physical mechanism must allow the objects to continue to gather material before pushing it all away. [Massive Star Formation Sites Discovered in Milky Way (Video)]

In 1996, Carrasco-González and his team used the Karl G. Jansky Very Large Array (JVLA) to observe a massive young star located 4,200 light-years from Earth. At the time, the star had a circular ring of material around it stretching 185 astronomical units in diameter. (An astronomical unit is the distance from the Earth to the sun — 93 million miles or 150 million kilometers). Scientists interpreted the disk as material heated up by the circular winds flowing evenly from the star.

While the scientists continued to study other characteristics of the star with different instruments, it wasn't until 2014 that the team used the JVLA again, and realized the star had changed significantly. The new image revealed that the material no longer encircled the star; instead, an elongated jet of material stretched outward. The estimated age for the expanding shell is about 25 years.

For a star, with a lifetime of tens of billions of years, a quarter of a century is barely the blink of an eye. So, these observations allowed astronomers the rare opportunity to study star evolution in real time.

"If the changes are due to either the turn-on of a new jet or a blob of gas being ejected in the jet, then these would be very rare events," Melvin Hoare, of the University of Leeds in the United Kingdom, told Space.com by email. Hoare, who was not part of the research, wrote the Perspectives article that accompanied Carrasco-González's research.

"The likelihood of catching one is rare," Hoare wrote.

The research and the Perspectives article were both published online today (Thursday, April 2) in the journal Science.

Massive young stars are hot and bright; W75N(B)-VLA2 shines about 300 times as brightly as the sun. Because it is a form of energy, the starlight pushes against the cold molecular cloud of material that surrounds it, heating and exciting it to create the signatures Carrasco-González and his team observed over time.

When the jet of wind hits the cold material, it forms a bow shock as it slows down, like a wave breaking off the front of a boat. Slowly, it pushes the material away. Eventually, the cloud of material stretches from its circular physique to create an outflow along its rotation axis, the axis around which the star spins.

The winds themselves may be sporadic, occurring at random times, or they may occur periodically, repeating on a regular schedule. Because VLA2 is part of a three-star system, Carrasco-González suggests that the occurrence is periodic, taking place as the stars draw closer together, allowing the winds to become stronger.

"We think that the behavior observed in this star should also be periodic because, if not, we would be very lucky to catch this moment," he said.

In other words, because the process lasts for less than two decades, it is very unlikely to be observed if it is a random event. On the other hand, if the episodes are periodic, behaving in the same way at different points in time, "it is more likely to be observed," Carrasco-González said.

The team cautions that the change may not be as radical as it appears when studying the images. After the hot, young star was observed in 1996, the JVLA underwent an upgradethat allows it to take a more in-depth view of the signature of the ionized winds. Therefore, it is possible that the wind was blowing a column that the instruments simply couldn't measure 18 years ago. However, if the star had already begun to form a column along its axis, that column would have been weak, the team said in its research.

If the hot, young star is truly evolving, then it has a good chance of helping scientists improve their understanding of how the winds evolve.

"The next step should be to study the behavior of the magnetic field in this star," Carrasco-González said.