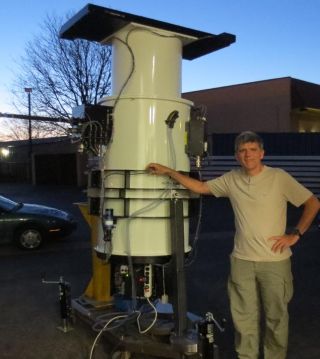 The ATLAS project is an asteroid impact early-warning system being developed by the University of Hawaii and funded by NASA. The project is dedicated to providing a one-day warning in the event of a potential  30-kiloton "town killer" asteroid strike; a week's warning for a 5-megaton "city killer"; and three weeks' notice for a potential 100-megaton "county killer" impact.

"We have First Light," according to an ATLAS team update. In a Colorado-based test at the end of March, the Acam1 camera and ATLAS 1 telescope were tested at DFM Engineering, Inc. in Longmont, Colorado. [Photos of Potentially Dangerous Asteroids]

The ATLAS asteroid project  is led by John Tonry of the Institute for Astronomy in Honolulu, Hawaii, with the work funded by a five-year NASA grant that began Jan. 1, 2013. The project's Haleakala and Mauna Loa sites are complete and ready for the installation of the DFM Engineering-completed ATLAS telescopes.

Each site has a fully certified 16.5-foot Ash dome, concrete pier, loft, storage, computers and essential electronics. Full robotic operation of both telescopes, including automatic reporting to the Minor Planet Center by early 2016 is the plan.

Telescope construction is progressing steadily with ATLAS officials expecting delivery and installation of ATLAS 1 on Haleakala at the end of April and ATLAS 2 somewhat later. In addition, there are ongoing discussions with NASA about a third ATLAS telescope in South Africa, which could prove an excellent location for early detection of dangerous asteroids.

When ATLAS is completed at year's end, it will consist of two telescopes located 100 miles (160 kilometers) apart that will automatically scan the whole sky several times every night looking for moving objects.

The key to detecting asteroids is that they continuously move against the more or less fixed background of stars and galaxies. A typical asteroid moves something like 30 seconds of arc an hour. ATLAS will therefore record pairs of images of each part of the sky, with exposures separated by about 30 minutes.

The computer system for ATLAS is capable of analyzing 500 megabytes of data per minute, capable of making a detailed comparison of the two images immediately after the second one is taken.

The computer will then compile a list of all objects that appear to have changed either their positions in the sky or their brightness. The next step is working out which of these objects is likely to be an asteroid moving across the sky, and which may be some other celestial phenomenon.

ATLAS will be capable of conducting an array of science pursuits, beyond searching for dangerous asteroids, such as:

Also on the ATLAS "can do" list is the ability to track space junk.

For an informative set of videos on the ATLAS, visit: http://www.fallingstar.com/videolist.php

Leonard David has been reporting on the space industry for more than five decades. He is former director of research for the National Commission on Space and is co-author of Buzz Aldrin's 2013 book "Mission to Mars – My Vision for Space Exploration," published by National Geographic, with a new updated paperback version to be released in May. Follow us @Spacedotcom, Facebook or Google+. Published on Space.com.