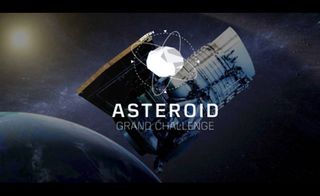 NASA’s Asteroid Data Hunter Contest was the first contest announced as part of NASA’s Asteroid Grand Challenge, which is focusing on finding all asteroid threats and knowing what to do about them.
(Image: © NASA)

Developed by NASA in partnership with Planetary Resources, a company that aims to mine asteroids, the software combines several algorithms developed in the Asteroid Data Hunter challenge.

"We applaud all the participants in the Asteroid Data Hunter challenge," Chris Lewicki, president and chief engineer at Planetary Resources, said in a statement. "We are extremely encouraged by the algorithm created, and it’s already making a difference. This increase in knowledge will help assess more quickly which asteroids are potential threats, human destinations or resource-rich." [Images: Potentially Dangerous Asteroids]

The new software was announced by a panel of NASA representatives on Sunday (March 16) at the South by Southwest Festival in Austin, Texas.

Announced in March 2014, the Asteroid Data Hunter challenge offered a total of $55,000 in awards for participants to develop significantly improved algorithms that could study images captured by ground-based telescopes and identify asteroids.

The winning entries for each section of the contest — which focused on minimizing false positives, increasing detection sensitivity, ignoring imperfections in the data and the ability to run effectively on all computer systems — were then combined to create an application to scan the skies.

The data hunter challenge kicked off NASA’s Asteroid Grand Challenge, which was announced in 2013.

"The Asteroid Data Hunter challenge has been successful beyond our hopes, creating something that makes a tangible difference to asteroid-hunting astronomers and highlights the possibility for more people to play a role in protecting our planet," he added.

In 1801, astronomers spotted the first objectin the asteroid belt between Mars and Jupiter — the dwarf planet Ceres — by carefully noting objects that appeared to move over time in comparison with the background stars. Technology allowed scientists to use images rather than memory or carefully sketched maps to compare how these bodies changed locations over time. By the time Clyde Tombaughspotted Pluto in 1930, astronomers around the world were using photographs of the night sky to identify moving objects.

Human evaluation of these images takes time, however. With the ever-increasing wealth of data, scientists have been searching for a way to utilize computers to rapidly evaluate the images and determine which objects require follow-up investigation.

The program can be downloaded for free and used on any basic laptop or desktop. Amateur astronomers can take images from their telescopes and use the application to analyze them. If the asteroid isn’t already on record, the software offers a way to report the discovery to the Minor Planet Center, which confirms and archives new discoveries.

"The beauty of such archives is that the data doesn’t grow stale, and with novel approaches, techniques, and algorithms, they can be harvested for new information," said Jose Luis Galache of the Minor Planet Center. "The participants of the Asteroid Data Hunter challenge did just that, probing observations of the night sky for new asteroids that might have slipped through the software cracks the first time the images were analyzed."