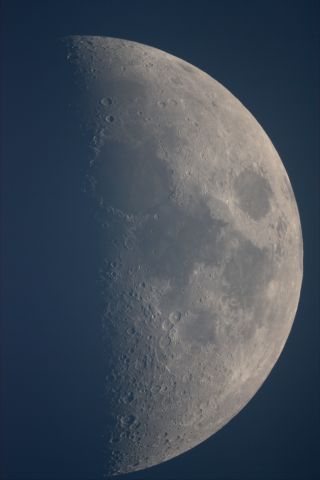 A daytime picture of the moon.
(Image: © Robert Vanderbei)

Robert Vanderbei is a professor in the Department of Operations Research and Financial Engineering at Princeton University and co-author, with J. Richard Gott, of the National Geographic book "Sizing Up the Universe" (National Geographic, 2010). Vanderbei has been an astrophotographer since 1999, and he regularly posts new images on his astro gallery website. Vanderbei contributed these images to Space.com's Expert Voices: Op-Ed & Insights.

Amateur astronomer and author Robert Vanderbei has captured stunning images of the night sky, all from his driveway, including a detailed comparison of a supermoon and its "distant" minimoon counterpart, revealed in "Supermoon vs. Minimoon: Sizing Up Earth's Satellite (Essay)." Vanderbei uses three telescopes to capture such images: a 3.5" Questar, a 4" Takahashi FSQ-106N refractor, and a 10" Ritchey-Chretien from RC Optical Systems. For taking pictures of faint deep-sky objects, he uses a StarlightXpress SXV-H9 CCD camera. For brighter solar system objects he uses a Canon XSi (450D). Below is a gallery of some of Vanderbei's favorite moon shots. (Images credit: Robert Vanderbei.)

A full moon image, with color saturation enhanced in photoshop to highlight the varying chemical composition of the Moon.

Robert Vanderbei stands in his driveway with one of his astrophotography setups.

A daytime picture of the moon.