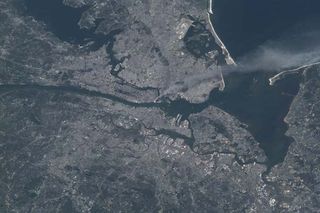 This image is one of a series taken that day of metropolitan New York City by the International Space Station's Expedition 3 crew that shows the smoke plume rising from the Manhattan.
(Image: © NASA)

HOUSTON - NASAcommemorated the five-year anniversary of the 9/11 terrorist attacks on the UnitedStates Monday with a video recorded by ExpeditionThree astronaut Frank Culbertson, who was aboard the International SpaceStation (ISS) the day of the 2001 tragedy.

Culbertson,who commanded Expedition Three, had been aboard the ISS for a month withRussian cosmonauts Vladimir Dezhurov and Mikhail Turin when the 9/11 attackstook place. The ISS crew learned of the attacks during a radio conference withflight surgeons, prompting Culbertson to record the Earth as the station passedover the northeastern United States.

"We justhad a short dash to make this at the very end," Culbertson said as he narratedthe video, adding that the ISS passed over Maine and could see the smoking remains of the World Trade Center in New York City. "Ourprayers and thoughts go out to all the people there...to the people in Washington.

"I just wanted thefolks in New York to know that their city still looksvery beautiful from space," Culbertson said. "I know it's a very difficult dayfor everybody in America right now and I know folks arestruggling very hard to deal with this and recover from it, but the countrystill looks good."

Culberton'stwo-minute video was the first of several memorials held to recognize the 9/11attacks and honor their victims.

When NASA'sspace shuttle Endeavour launched toward the ISS in December 2001, it carried a U.S. flag retrieved from the World Trade Center. The astronaut crews of Endeavour,Expedition Three and their Expedition Four relief also paid tribute duringtheir joint operations and landing.

"I hopethat the people responsible are found and brought to justice just as soon aspossible," Culbertson said in his video.

"Theworld changed today," Culbertson said of the 9/11 attacks. "What I say or do isvery minor compared to the significance of what happened to our country todaywhen it was attacked."

Five yearsafter the 9/11 attacks, NASA's space shuttle Atlantis dockedat the ISS with sixSTS-115 astronauts and a new addition for the orbital outpost.