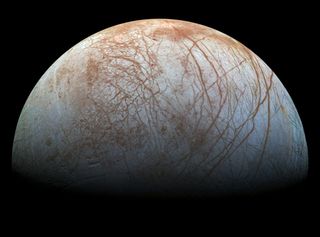 Jupiter's icy moon Europa (seen here) could be one of the most hospitable places for life in the solar system. What would it be like for astronaut explorers?
(Image: © NASA/JPL-Caltech/SETI Institute)

Jupiter's icy moon Europa has long been thought of as a potentially friendly place for life in the solar system. But what would human explorers find if they set down their ship on the moon's icy shell?

Living on the surface of Jupiter itself would be difficult, but maybe not impossible. The gas giant has a small rocky core with a mass 10 times less than Earth's, but it's surrounded by dense liquid hydrogen extending out to 90 percent of Jupiter's diameter. If you were to step foot on the planet's core, "you would be crushed by the weight of the liquid hydrogen above," said Robert Pappalardo, a planetary scientist at NASA's Jet Propulsion Laboratory (JPL).

Jupiter has more than 60 moons, some of which are plausible locations for permanent bases. With its low radiation levels, geologic stability and large amount of water ice, Callisto probably would be the ideal Jovian moon for a settlement, said JPL astrobiologist Steve Vance. [Living on Europa: The Conditions Explained (Infographic)]

However, another moon of Jupiter — Europa — is thought to have a vast water ocean beneath its icy surface, and is considered the best place to find life in our solar system. Setting up a research base on Europa would help scientists probe that potentially habited ocean.

Currently, there are very big holes in scientists' knowledge of Europa's surface, Pappalardo told Space.com. Eight spacecraft have visited the Jovian satellite, but only 10 to 15 percent of the surface has been photographed at a decent resolution.

Pappalardo and Vance are currently working on concepts for NASA's proposed Europa Clipper mission, in which a probe would perform 45 flybys of Europa, allowing scientists to get more detailed images of the moon's surface than ever before.

"If you were to look in any direction, you'd see little ridges, no more than a couple of meters high," Vance told Space.com. You'd also see numerous cracks that crisscross the globe. These cracks and ridges are likely the result of the daily rise and fall of Europa's subsurface ocean due to tidal forces from Jupiter, scientists have said.

The best location for a base on Europa would be on the side of the moon that leads the moon as it orbits around Jupiter — the planet's magnetosphere showers Europa with deadly radiation, which is far stronger on the trailing hemisphere of the moon.

A base there would also offer up a spectacular view: Jupiter would look almost 24 times larger in the sky than Earth's moon appears from the planet's surface. "It wouldn't be a boring place to drink your afternoon tea," Vance said.

However, residents of Europa would have to deal with the blistering cold. The temperature averages about minus 260 degrees Fahrenheit (minus 160 degrees Celsius) near the equator and minus 370 F (minus 220 C) near the poles, Pappalardo said.

Aside from the radiation and cold, a few other dangers exist on Europa. Modest ice quakes — which might feel somewhat like an earthquake on Earth — could occur every now and then, and you'd definitely want to watch out for giant plumes of water that could violently shoot out of the ice. There would also be a small chance you'd be hit by a small meteor or particles from space.

Europa's gravity is only about 13 percent of Earth's, resulting in a virtually nonexistent atmosphere. Because of this, Europa, like Earth's moon, has no weather, wind or sky colors. And walking on Europa would feel similar to walking on Earth's moon.

If you went for a stroll, you'd probably want to visit Europa's "chaos terrain," where the normally flat ice has been fragmented into jumbled blocks. "It might look like you're in Monument Valley," Pappalardo said. You'd also want to see the moon's depressions and ice domes, which are up to a little more than a half-mile (1 kilometer) high.

If you wanted to share your experiences with people back home, an email would take at least a half-hour to get there — just make sure massive Jupiter isn't blocking your view of Earth.

Editor's Note: This is Part 5 in Space.com's 12-part series "Living on Other Planets: What It Would Be Like" to see what an astronaut would see on other planets and moons of our solar system and beyond. Check back each Tuesday to see what humans might encounter on other cosmic bodies in the universe. This story was corrected on March 16 to clarify where the best location for a base on Europa would be.