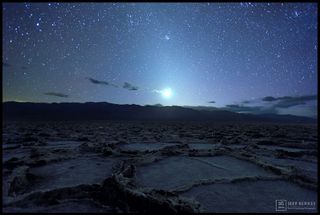 Over the next two weeks, you have an excellent chance to spot one of the most rarely observed objects in the sky, the zodiacal light.

The zodiacal light takes its name from the ancient band of 12 constellations through which the sun, moon, and planets pass, the Zodiac. Modern astronomers prefer to use the name of the sun's path, the Ecliptic, and add a 13th constellation, Ophiuchus.

Most of the material in the solar system is concentrated in a flat disk coinciding with the ecliptic. Besides the eight planets and their accompanying moons, there are thousands of asteroids and millions of smaller particles, ranging all the way down to fine grains of interplanetary dust.

These millions of particles cannot be seen as individual objects, but like the distant stars in the Milky Way, their tiny inputs of light combine to create a faint glow along the plane of the ecliptic. This is what we call the zodiacal light.

Most people nowadays have never seen the Milky Way because its light is so faint that it is wiped out by light pollution except under dark country skies. The zodiacal light is even fainter than the Milky Way.

Veteran night sky photographer Jeffrey Berkes managed to capture the zodiacal light in March 2014 during a trip to Death Valley National Park, where he photographed the celestial light from Badwater Basin.

"It was simply incredible here with the unworldly landscape at the lowest point in the US (232 feet below sea level)," Berkes told Space.com in an email, adding that he will return to Death Valley this year to make another attempt while running an astrophotography workshop.

So to see the zodiacal light you first of all need to get away from light polluted urban skies. You need to observe at the dark of the moon, such as we will experience over the next two weeks. Finally you have to choose the right time of the year, when the ecliptic is close to rising vertically in the sky, normally in February and March in Northern Hemisphere evenings. You also need to give your eyes at least 20 minutes in total darkness so that they reach their maximum sensitivity.

Use the bright planets Venus and Mars low on the western horizon to locate the base of the cone of zodiacal light, which will be tilted over to the left. The similar cone of the Milky Way, about 20 degrees to the right, will give you an idea of the shape to look for.

It will also help to use what astronomers call "averted vision." This takes advantage of the fact that the most sensitive cells in our eyes' retinas are not in the central part of the visual field, but slightly away from it. The trick is to look slightly away from where you expect the zodiacal light to appear. This will put it on the most sensitive part of your eye, and improve your chance of seeing it.

Once you manage to spot the zodiacal light, try to follow it upward in the sky towards the zenith. You may see a faint glow directly opposite the sun's location, called the gegenschein, German for "counterglow." This is a slight concentration of sunlight reflected off the interplanetary dust, just as traffic signs reflect back the light of car headlights.

Spotting the zodiacal light and gegenschein are among the rarest astronomical observations any stargazer can accomplish. Good luck, and let us know if you succeed.

Editor's note: If you capture an amazing view of the zodiacal light or any other night sky sight and want to share it with Space.com for a story of gallery, you can send images and comments in to managing editor Tariq Malik at: spacephotos@space.com.