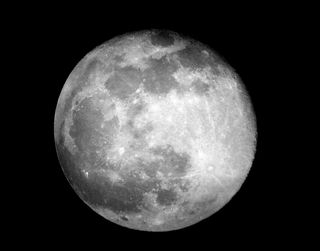 Many lunar impact basins are visible in this moon photo, which was snapped in May 2013 by astrophotographer Anthony Lopez in the Mexican city of Juarez, near the Texas border.
(Image: © Anthony Lopez)

If you have recently received a telescope as a holiday gift, it is likely that your very first target will be our nearest neighbor in space: the moon.

When is the best time to observe the moon with a telescope? Most astronomy neophytes might say it is when it's at full phase, but that's probably the worst time to look at it! When the moon is full it tends to be dazzlingly bright as well as flat and one-dimensional in appearance.

In contrast, the interval when the moon is at or just past first quarter phase, or at or just before last quarter phase, is when we get the best views of the lunar landscape right along the sunrise-sunset line or terminator. The terminator can also be defined as that variable line between the illuminated portion and the part of the moon in shadow.

Along with the fact that a half moon offers more viewing comfort to the eye as opposed to a full moon, using a telescope with just small optical power (magnifications of 20- to 40-power), or even with good binoculars, we can then see a wealth of detail on its surface. Around those times when the moon is half-lit or gibbous phase, those features lying close to the terminator stand out in sharp, clear relief. [The Moon: 10 Surprising Lunar Facts]

In contrast to a half moon, a full moonis almost completely illuminated, especially right around its center; the sun shines straight down even into all the microscopic crevices and except for perhaps around its immediate edges, you will find no visible shadows at all.

The moon will arrive at last quarter phase on Thursday, Feb 11, at 10:50 p.m. EST (0350 Feb. 12 GMT). That will be the moment when the moon's disk is exactly 50-percent illuminated. Lunar mountains will be visible as the sun lights them from the right.

Finally, have you ever noticed that when artists portray the moon, they invariably seem to show it as either a slender crescent or full?

Half-moons are shown far less frequently, while gibbous moons are rarely depicted at all. The word gibbous is derived from the Latin word "gibbus" meaning, "hump."  An unusual word to be sure, but in describing the moon between half and full, it's the correct term.

Yet interestingly, the gibbous moon, the phase of the moon that we are now seeing in our current evening sky is the most-seen phase. It occurs for the half month between first and last quarter (although for many it looks "full" for two or even three nights around the time of full moon).

Because it is in the sky for more than half the night we're more apt to see the gibbous moon. In fact, it is even visible during the daytime hours, as will be the case during this upcoming week in mid or late afternoon. In contrast, the oft-pictured crescent moon is visible only during the early evening or early morning hours, and sometimes only briefly.

Editor's note: If you capture an amazing view of the moon, or any other night sky object, and you'd like to share it with Space.com for a story or image gallery, send photos and comments in to managing editor Tariq Malik at spacephotos@space.com.