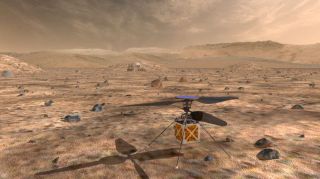 A proposed robotic helicopter could triple the distances that Mars rovers can drive in a day and help pinpoint interesting targets for study, NASA researchers say.
(Image: © NASA/JPL-Caltech)

NASA's future Mars rovers may get a bird's-eye view of their Red Planet surroundings, thanks to tiny helicopter scouts.

Engineers at the space agency's Jet Propulsion Laboratory (JPL) in Pasadena, California, are developing a 2.2-lb. (1 kilogram) helicopter drone for Mars that measures 3.6 feet (1.1 meters) from blade tip to blade tip. This aerial system could be deployed by NASA's 2020 Mars rover, and would work in partnership with the six-wheeled robot.

"If our rover was equipped with its very own helicopter that could see over tall objects in front of it, it would allow us to make decisions much more efficiently on which way to command the rover," JPL mechanical engineer Mike Meacham said in a video about the possible Mars helicopter that NASA released on Thursday (Jan. 22).

Of course, flying a robotic helicopter on Mars would be much tougher than doing so here on Earth. For starters, the Martian atmosphere is just 1 percent as dense as that of Earth at sea level, meaning a chopper would have to have bigger blades, or spin them faster, to stay aloft on the Red Planet.

And that's not the only issue.

"There's the challenge of keeping the whole mass of the system small so that we don't overwhelm the lift capability of this system," Bob Balaram, chief engineer of mobility and robotics systems at JPL, said in the NASA video.

"It has to be autonomous in terms of being able to fly and maintain stable flight," he added. "And then, this system has to repeatedly take off and land on natural rocky terrain like you see out here. And then, the other one is that it has to survive the harsh environment of Mars."

Features of the proposed system include counter-rotating propellers designed for use in the thin Martian air; batteries that are recharged by solar power; a high-resolution, downward-looking camera for navigation, landing and science surveying of the terrain; and a communications system to relay data to the rover.

According to a paper called "2014 Robotics Activities at JPL," by the facility's Richard Volpe, the helicopter would help mission team members explore the terrain surrounding a Mars rover, yielding a better understanding of geological context and aiding in target and path selection.

For safety reasons, the helicopter would not operate near the rover. Instead, it would be dropped off on the ground, and would only become active after the rover had driven a sufficient distance away.

Individual daily flights would be limited to just 3 minutes or so due to power constraints. The helicopter would likely fly as high as 330 feet (100 m) and cover a ground track of about 2,000 feet (600 m) each day, the researchers said.

The helicopter's observations would provide overhead images some 10 times greater than Mars-orbiting spacecraft can obtain, and greater area coverage than can be seen from the rover's perspective.

While the Mars helicopter project is still at a relatively early stage of development, researchers have made a fair bit of progress, Balaram said.

"Over the course of the last year, we have done a number of tests in our 25-foot (7.6 m) vacuum chamber, using scale models where we pump down to Mars densities, demonstrating lift of these kinds of blades," he said.

A flying device on Mars has been proposed in the past. Several years ago, the NASA Institute for Advanced Concepts (now the NASA Innovative Advanced Concepts program) funded research into the idea of using an insectlike "entomopter" for future Mars atmospheric exploration missions.

And other types of Mars flight hardware, including balloons, may well become part of the exploration tool kit of a human expedition to the Red Planet. NASA aims to get astronauts to the vicinity of Mars by the mid-2030s.

Leonard David has been reporting on the space industry for more than five decades. He is former director of research for the National Commission on Space and is co-author of Buzz Aldrin's 2013 book, "Mission to Mars — My Vision for Space Exploration," published by National Geographic with a new updated paperback version to be released in May. Follow us @Spacedotcom, Facebook or Google+. Originally published on Space.com.