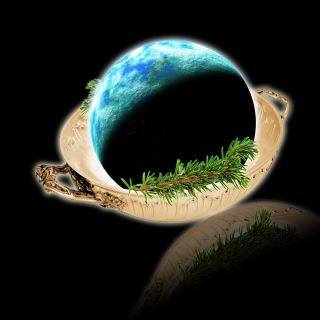 How do you make an Earth-like planet? The "test kitchen" of Earth has given us a detailed recipe, but it wasn't clear whether other planetary systems would follow the same formula. Now, astronomers have found evidence that the recipe for Earth also applies to terrestrial exoplanets orbiting distant stars.
(Image: © David A. Aguilar (CfA))

Earth is a unique, life-supporting world, but new research shows that the "recipe" for Earth might also apply to terrestrial exoplanets orbiting distant stars.

The new research suggests that other rocky, Earth-like planets follow the same basic mix of elements and likely formed the same way Earth did. These Earth-like planets include the recently discovered Kepler-93b, which is about 300 light-years from Earth.

"Our solar system is not as unique as we might have thought," Courtney Dressing, lead author of the new study and a researcher at the Harvard-Smithsonian Center for Astrophysics, said in a statement. "It looks like rocky exoplanets use the same basic ingredients." [The 6 Most Likely Places to Find Alien Life]

These potentially Earth-like exoplanets need the right mix of chemicals and must be in a relatively young star's habitable zone— the orbit where liquid water could theoretically exist on a planet's surface. Then, if an asteroid delivers water and the right kind of organic compounds, the planet can potentially host life, according to the new research, which was presented by Dressing during the American Astronomical Society meeting in Seattle earlier this month.

The new findings come from the High-Accuracy Radial Velocity Planet Searcher (HARPS)-North instrument mounted on a telescope called the Telescopio Nazionale Galileo in Spain's Canary Islands. The instrument is specially designed to study exoplanets and differentiate between the terrestrial, Earth-like exoplanets and the more gaseous alien worlds.

The HARPS device can accurately determine a planet's mass by measuring how much light it blocks when it passes in front of its neighboring star. The mass of a planet can be used to calculate its density, and the density reveals what the planet is made of and if it's potentially habitable.

Dressing and a team of researchers focused on Kepler-93b, a planet about 1.5 times the size of Earth. The HARPS-North telescope measured Kepler-93b's mass as about four times that of Earth. This means that the planet is most likely a rocky, Earth-like planet, they said.

The team then measured the mass of the 10 other exoplanets, all with diameters of less than 2.7 times Earth's diameter. The results show that the five smallest planets have a very close relationship between mass and size, and are likely rocky, like Earth, scientists said. The five larger planets had much lower densities, meaning they're likely made of a large portion of low-density materials like water, hydrogen or helium, the research team added.

Astronomers using HARPS-North have focused their efforts on planets less than twice the size of Earth, but the cutoff size for Earth-like planets might be even smaller.

"To find a truly Earth-like world, we should focus on planets less than 1.6 times the size of Earth, because those are the rocky worlds," Dressing said in the same statement.

The new research has been accepted for publication in The Astrophysical Journal.